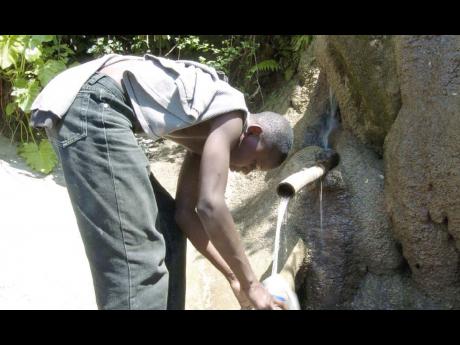 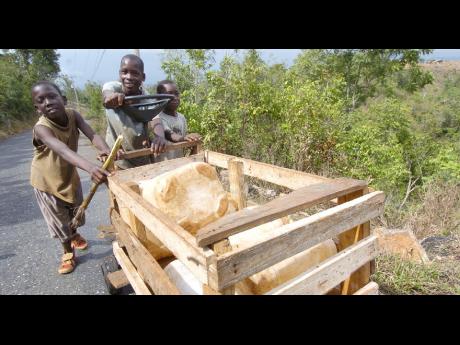 Although most of us are used to getting water from our taps, these youngsters in Lluidas Vale, St Catherine, have to travel miles to get some drinking water from a standpipe. - Ricardo Makyn/Staff Photographer
1
2

A decade into the 21st century and Jamaica still remains the land of wood and no piped water for more than 800,000 Jamaicans who are still not being served by the National Water Commission (NWC), the parish councils or private providers.

According to the country's national report on the millennium development goals (MDG) that was presented to the United Nations Economic and Social Council's (ECOSOC) annual ministerial review in Geneva last year, between 1990 and 2007 the proportion of the approximately 2.7-million population with access to "piped water at home (indoor or private outside)" rose by only nine per cent. In 2007, the percentage stood at 70.2 per cent, which means almost 30 per cent of the estimated 2.7 million people living on the island do not have access to water in their homes.

Charles Buchanan, corporate relations manager at the NWC, told The Sunday Gleaner that the state-owned company that has some 400,000 customer accounts, but supplies water to more than two million people on a daily basis, is "not intended to be the sole provider of water in Jamaica". He explained that the Government's policy allows for, and encourages, a range of interventions from other sources, including parish councils and private providers. Buchanan said some rural areas might never get piped water solutions. "There are some areas that are infeasible to reach: technically and financially ... It is recognised that there are some rural parts of Jamaica that cannot be supplied by municipal-type arrangements," he said.

It is this reality that makes many residents from rural areas view water trucks laden with the 'precious commodity' as a godsend, even if the water is a swimming pool of bacteria. Paul King, a 38-year-old water truck driver who operates in the Spring Gardens area of St Catherine, scoffed at the possibility of his community ever receiving piped water from the authorities. "Dem say dem a gi wi water up deh and ah years now and we nuh see nutten yet," remarked King, whose truck serves the communities of Dover, Kitson Town, Cottage, Content and Cherry.

But, a notation in the report clarified that the "MDG definition of an improved drinking water source includes rainwater". The national report did not provide a breakdown to show how many persons actually depended on rainwater as their improved source of drinking water.

"Water and sanitation indicators appear to be unchanging because of the difficulty in halving the gap when, since 1990, access to safe drinking water has been over 91 per cent, and to basic sanitation over 99 per cent," read a section of the national report to the UN ECOSOC annual ministerial review.

"Improved water sources is a critical target for the nine per cent without safe drinking water, and improved access is important for the 1.5 per cent of households whose members have to carry water for distances of 50 to over 1,000 metres. The majority are women and children."

The report went on to highlight that "quality improvement in water access, with a target of 85 per cent receiving piped water to their dwelling by 2015, has been a focus".

The Geneva ministerial review was advised that the need of the approximately 30 per cent of the population living without access to piped water is being addressed by the Ministry of Water and Housing's Rural Water Supply agency, which harnesses small streams, rivers and springs to supply isolated communities.

"It also organises public trucking of water. The promotion of private-sector partnership has resulted in eight licences being issued to private companies to supply potable water," the report said.