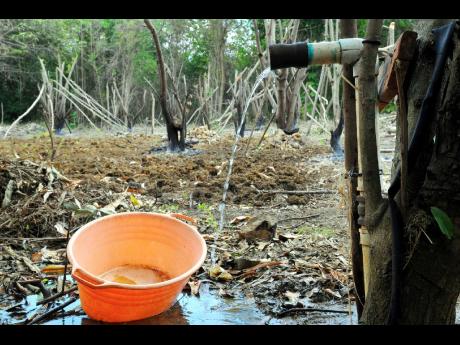 The third sample was collected from this makeshift pipe in Spring Village, St Catherine - just a stone's throw away from Camp Verley - immediately after a water truck had just finished loading up to take the precious commodity to waiting residents in the nearby communities.

While you may not take a drinking glass to the untreated water sources, if the fluid, chilled with ice, is presented to you on a hot sunny day, you would not detect contamination with the naked eye.

The water looks clean. But looks are sometimes deceiving. But here comes science to the rescue.

The Sunday Gleaner decided to put a few of the water sources being used by these truckers to the test. Last Tuesday, three sterile bottles, a cooler and an ice pack were collected from the National Public Health Laboratory to collect the samples. A chemist from the lab told our news team to ensure that nothing but the water got into the bottle. Special attention had to be paid to the bottle corks to ensure that nothing got underneath the linings. Samples were collected from three different locations and taken to the lab. The condition of the samples at source was maintained with the help of the ice pack and the cooler.

The locations visited by our investigative team were the Ferry Fresh Water River along Mandela Highway; a stream that makes its way through the Camp Verley property in Spring Gardens, St Catherine; and, another location in Spring Gardens that residents said was known as the Inswood property.

Three days after the samples were delivered, the results of the bacteria test were ready. The findings were damning.

According to the National Public Health Laboratory, water from none of the three sources should be consumed without being treated by either boiling or chlorination. The latter treatment can be achieved by using a prescribed amount of bleach, depending on the amount being treated.

One of the water sources was not even safe enough for swimming, and would require extensive treatment. The sample taken along the roadside from the stream that bends its way through Camp Verley even failed the basic bathing-water standard for faecal coliform. The bathing water standard is 100 most probable number (mpn) per 100 millilitre. The test showed that the faecal coliform count in the Camp Verley sample had 110 mpn per 100 millilitre.

The camp Verley sample also exceeded the maximum 1,600mpn per 100-millilitre mark on the multiple-tube fermentation test that was used to determine the total coliform count.

Both faecal and total coliform should be absent if the water is to be stamped potable.

Horace Chang, minister of water and housing, said the matter was a public-health one. Chang said the Government has routinely issued advisories warning the public not to take water from someone who is not approved.

However, William Broughton, director of the environmental health unit in the Ministry of Health, pleaded ignorance to the booming trade. Broughton refused to comment on the lab results as he pointed out that he had no faith in our news team's ability to secure sterile samples for testing.

The director even denied having knowledge of an uncomplimentary report penned by a public health inspector about water trucks "harnessing drinking water from untreated and unlicensed sources".

Meanwhile, when confronted by our news team at the Ferry Fresh Water River, the truck drivers, who were seen filling up their tanks, denied that they were going to sell the water to unsuspecting residents as drinking water.

"Mi woulda neva mek people drink that. Hurt you ah hurt people with that," said one of the truckers.

Charles Buchanan, corporate communications manager at the National Water Commission, said that the selling of contaminated water was a source of significant concern for the company. He said that some residents blindly support the truck drivers who are selling them bacteria-infested water to drink.

WHERE YOU live could affect the price you pay for privately trucked water. If you live in an upscale neighbourhood, chances are you will have to dig deeper into your pockets compared to residents in other areas.

At that time, a woman who lives in Barbican, St Andrew, told our news team that the fetching price was $10,000 to load up the 1,000-gallon water tank.

Another man who resides in another upscale area disclosed that he purchased a 1,000-gallon tank of water for $15,000.

When The Sunday Gleaner contacted the operator under a disguised name and gave an address in a lower middle-class community, the asking price was $8,000.

But the National Water Commission (NWC) said while it monitors truckers it contracts, and delivers that water free of cost to customers, it is unable to flush out private operators.

According to Buchanan, selling water so expensively might not be illegal, and one of the challenges the NWC was confronted with during this severe drought was to monitor the price at which truck operators sold water.