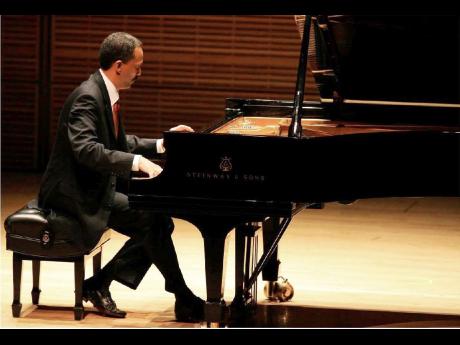 And so, Orrett Rhoden is once again wooing the world. His talent, even more finely honed, is now harnessed, thus allowing for his natural talent to so shine through. His brilliance is intoxicatingly riveting as it is inspiring!

Dears, it has become increasingly clear in recent times that Jamaicans are among those truly blessed people and Jamaica is a favoured land. The country's influence and relative power to impact the world and events are nothing short of phenomenal, given the challenges of absence of resources, which other societies and cultures take for granted.

From the time of Columbus' intervention to contemporary 'history', Jamaicans have not only been front and centre of global dialogue, they have distinguished themselves as world leaders in varying fields of endeavour.

Orrett Rhoden is a distinguished Jamaican pianist who eschews the appeal of popular and sentimental piano music for the more arduous task of being a classical concert pianist. He is the finest this land has produced to date.

On October 15, 2009, Rhoden, under the aegis of Dr Nigel Clarke, gave a recital at the world-famous Carnegie Hall, showcasing the works of Beethoven, Chopin, Schumann, and Scarlatti, among others. It earned such fine reviews, the performance was later recorded and made available to music lovers and fans of the pianist by way of CD.

And by popular demand, two Sundays ago, Rhoden, under the patronage of painter/sculptor/ dancer/philanthropist, Susan Alexander, he repeated his Carnegie Hall recital, for a hand-picked audience, at Alexander's Drumblair, St Andrew, residence. It was a musical rendezvous with the senses for those in attendance!

Dears, the evening began, most fittingly, with a champagne prelude in the gardens at 6:30. Guests were then invited to be seated some 40 or so minutes later for what truly proved a command performance.

After the host's introductions, Rhoden appeared at 7:28 p.m., sporting a tweed sports coat and flashing a brilliant smile to welcoming applause. Taking his seat Rhoden took command of the grand Steinway and for the next 90 minutes, dazzled like a genius, oblivious to all.

Dears, some pianists play for their audience. The new Rhoden ignores his audience, engulfing himself in the music, focused on capturing the essence of the composers, every nuance, almost in a trance-like state. He seems charged with challenging himself not to merely play, but to transport himself into another time and place where the enjoyment of was not a social accoutrement trotted out from time to time, but was the very soul of the people!

Rhoden has the ability to transport his audience to that time and place where music was the food of the soul and giver of life to the mundane and lifeless!

He opened with Scarlatti's Sonata in A Major L483, followed by another Sonata from Scarlatti, A Major L345 and he finished the first segment with Sonata No. 21 in C Major Opus 53, Waldstein, first movement Allegro Con Brio, second movement, introduction - Adagio Molto and the third, Rondo: Allegretto Moderato by Beethoven, Mr Rhoden was at his classical best!

After a break, Rhoden lost none of his verve or panache as he went into Chopin Scherzo No. 2 in B Flat Minor Opus No. 31, and ended with Études Symphoniques Opus 13 by Robert Schumann. There was no denying Rhoden is clearly and magnificently an expert when it comes to giving a grand concert. Understandably so, as he is clearly at the very top of his chosen profession.

It was a simply marvellous evening, ending on a even higher note with the pianist autographing copies of his CD for guests!