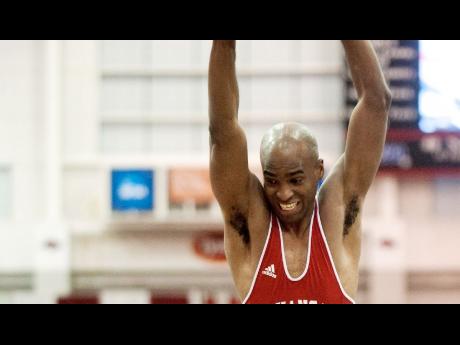 Arkansas' Alain Bailey makes an attempt during the long jump competition at the NCAA Division I Indoor Championships on Friday in Fayetteville, Arkansas. - AP photo

The former Kingston College athlete, who is competing in his final year for the University of Arkansas, equalled his season and personal best by leaping to 8.17 metres for the win, the same distance he did when he won the South Eastern Conference meet two weeks ago at the same venue.

Bailey was happy with the win."I feel very good for the win as I have been waiting four years for this, and also I am happy to know that it is a personal best," said Bailey. He is now looking forward to the outdoor season.

There were two medals for Jamaican athletes in the event. Bailey's teammate and former Kingston College jumper, Tarik Batchelor, ended in third position with 7.92 metres.

Two other Jamaicans were in action on Friday. Kimberly Williams, competing for Florida States University, was fifth in the women's long jump with 6.46 metres, and former Queen's High sprinter, Louisiana State University's Samantha Henry, was seventh in the 200 metres. The long jump meet record, 6.81m, held since 2003 by Jamaica's Elva Goulborne, was erased by Blessing Okagbare of the University of Texas, El Paso. Okagbare's new mark is 6.87 metres.