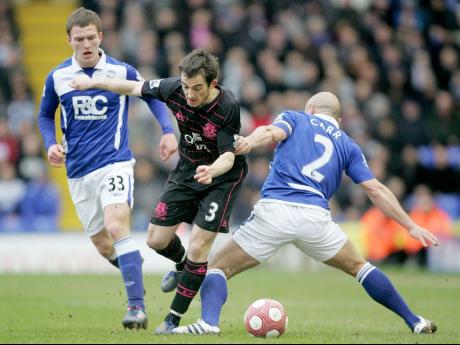 Chelsea beat West Ham 4-1 yesterday to retake the provisional lead in the Premier League, while Arsenal drew level on points after a stoppage-time winner by Nicklas Bendtner earned a 2-1 victory at 10-man Hull.

"We had a lot of chances and played well and we maintained a good control of the game also when we were level," said Chelsea manager Carlo Ancelotti. "We had a good performance."

"It will be a long race to win this title. They are strong teams, Manchester United and Arsenal, so we have to maintain our confidence, our play. We want to play our best every game."

Arsenal appeared headed for a draw at Hull after Jimmy Bullard converted a penalty for the home side following a foul by Sol Campbell on Jan Vennegoor of Hesselink. The spot-kick cancelled out Andrey Arshavin's early strike for Arsenal.

Hull had George Boateng dismissed in first-half stoppage time for his second yellow card and spent almost the entire second half on defence.

But Bendtner netted the winner after Hull goalkeeper Boaz Myhill had failed to hold a shot from Denilson, and the results mean Arsenal and Chelsea are level on 64 points.

After Blackburn had lost their former Tottenham goalkeeper Paul Robinson with a leg injury, Jermain Defoe turned the ball home from a corner in first-half stoppage time and Pavlyuchenko added two more goals in the second half, his first a shot that went under the body of replacement 'keeper Jason Brown.

The victory guarantees Tottenham stay fourth on the day, which would mean a shot at next season's Champions League if they stay there until the end of the campaign.

It was Blackburn's 11th away defeat of the season but Sam Allardyce's mid-table team appears to be clear of relegation trouble.

Aston Villa's hopes of catching Tottenham for fourth were hit by a goalless draw at Stoke. Villa remain six points behind Spurs, although Martin O'Neill's team has two games in hand.

Manchester City, who are also in contention for fourth, go to Sunderland today and sixth-place Liverpool, who are four points behind Tottenham, face last-place Portsmouth tomorrow.

Wolves revived their survival chances with the victory at Burnley.

Matt Jarvis fired the visitors ahead in the 26th minute before a shot from Adlene Guedioura that took a deflection off Clark Carlisle for a 47th-minute own goal made it 2-0. Although Burnley hit back with a 73rd-minute header by Steven Thompson, his team remains in the relegation zone with Wolves just outside.

Bolton moved further away from danger with a 4-0 triumph over Wigan. Johan Elmander, Kevin Davies, Fabrice Muamba and Matt Taylor all found the net.

Birmingham rallied from two goals down to draw with an Everton side who appeared in control after two first half strikes in four minutes by Victor Anichebe and Ayegbeni Yakubu. Cameron Jerome and Craig Gardner hit back for the home side.