I want to be the best - McLaughlin 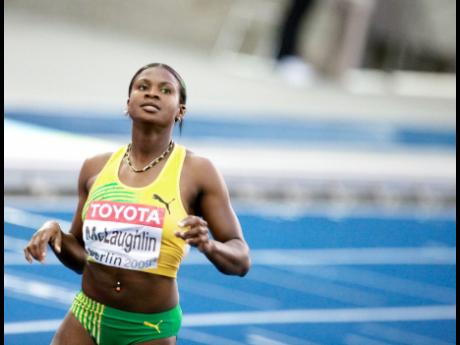 At the tender age of 24, sprint sensation Anneisha McLaughlin has already experienced the highs and lows of a career that includes domination at the high school level and an impressive fifth-place finish in the 200 metres final at the IAAF World Championships in Athletics in Berlin, Germany.

Her Berlin exploits signalled the return to form of one of the island's most promising athletes, after the former Holmwood Technical star's miserable post-high school experiences that included a forgettable stint at a US College and a battle with injuries and excessive weight.

The bubbly University of Technology student now runs out of the Stephen Francis-coached MVP Track Club and has rediscovered her love and ambitions for the sport. However, with a balancing act that features personal commitments as well as her athletic ambitions and pursuit of a business administration degree, McLaughlin has her work cut out for her.

One-on-One caught up with McLaughlin recently.

Question: How did you get involved in athletics?

Anneisha McLaughlin: I started through participation at sports day at primary school and I realised that I had a little talent, so I continued and got a chance to develop at Holmwood Technical.

Q: If not athletics, which other sport would you be playing?

AM: I used to play netball at primary school and also in first form at Holmwood and I liked it, so maybe that's what I would be doing.

Q: Where you any good at netball?

AM: (Laughs) Oh my God! Somewhat I guess ... maybe I was just average.

Q: You had a lot of success at the high school level competing for Holmwood Technical. Take us back and tell us what it was like competing at Boys and Girls' Championships.

AM: My years at high school were the best years of my life. Competing at Champs you are always motivated to do your best because of the support and the vibes. I've never competed anywhere with that kind of atmosphere.

Q: Looking back, who would you say was your strongest rival at Champs?

Q: You are now a senior athlete but it has not been the easiest of transitions. What would you say has been your biggest challenge where transition is concerned?

AM: I was consistently plagued with injuries over a two-year period and I also had to do a lot of work on my technique, even though it's still not where I want it to be.

Q: How difficult has it been to balance your athletic ambitions and school?

AM: It's extremely hard especially after having hard days at training and then having to go to class, but you just have to make up your mind to work towards your goals.

Q: What keeps you motivated to continue despite the challenges?

AM: I think about my parents, my high school coach, my sponsor from Fontana (Pharmacy), because they always encourage me to do well and support me. My mom especially, has played a significant role in my development. From primary school days, she has been supporting me 100 per cent.

Q: What are your objectives going forward?

AM: To be the best; I'm hoping to obtain a World Championships or Olympic medal in the 200m.