Oh so easy for Lifeisjusforliving 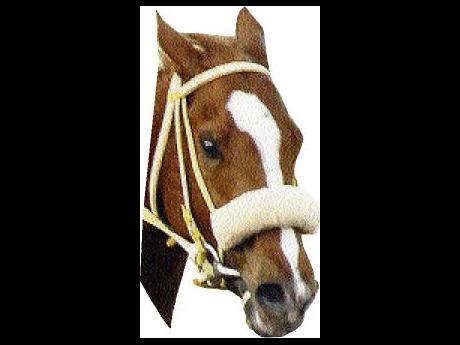 The 1-4 favourite LIFEISJUSFORLIVING is eased down by champion jockey Omar Walker to win the $1.3 million Prince Consort Stakes over 1400 metres, confined to three-year-old colts and geldings, at Caymanas Park yesterday. - Colin Hamilton/Freelance Photographer

Earlier in the afternoon, the stretch-running GABIWITZO came through in mid-stretch to win the co-feature race over 1400 metres, the Thornbird Stakes for native-bred 3-y-o fillies, by four lengths.

But is was the performance of LIFEISJUSFORLIVING, who won in post-to-post fashion under champion jockey Omar Walker, that left punters in awe, as he cruised to his third win from an many starts, covering the distance in the smart time of 1:25.2 behind splits of 23.4, 46.3 and 1:11.1 for the first 1200 metres.

After turning for home with a commanding lead over ROLEX, LIFEISJUSFORLIVING won by 91/2 lengths from the late-running JUNIOR MINISTER (16-1), even though eased down by Walker over the final 100 metres.

By Region Of Merit out of Bold Queen, LIFEISJUSFORLIVING, who was unraced as a two-year-old, is owned by Edmund Thomas' Church Pen Farm, trained by reigning champion Wayne DaCosta and bred by the Orange Valley Estates Limited. 'LIFE' is now the season's leading stakes winner with $1.7 million from his three wins.

DaCosta said he was "very impressed" with the performance: "He has a tremendous amount of potential and we have high hopes for him ... He opens up when he turns into the straight, which is a good sign," noted the trainer.

Thomas jokingly remarked: "The trainer told the jockey to break in front and when you come to the corner make a left turn and you must win."

Meanwhile, GABIWITZO (9-2), ridden by Carlton Malcolm, ran on strongly to overhaul the front-running HERA and SOCA PARTY in the Thornbird Stakes, covering the distance in 1:26.4, one and two-fifths of a second slower than the time posted by LIFEISJUSFORLIVING over the same distance.

The even-money favourite AL FOUZIA could only manage fifth after missing the break.

GABIWITZO, who had previously won this trip on February 20, is owned by Sherman Clachar and trained by Fitznahum Williams, both of ALSAFRA fame. One of two winners for lightweight jockey Carlton Malcolm, the Pat N Jac- Royal Grind filly was bred by Argyll Farms Limited.

On a day when Malcolm, Walker and the apprentice Aaron Chatrie rode two winners each, while DaCosta and Spencer Chung saddled two each, THE GUV (Chatrie up) turned in an impressive display to win the overnight allowance race over 1400 metres in fast time (1:25.0). Among his victims was the champion 2-y-o of last season, COLONEL WALES, who was beaten into third place in this his Guineas prep.