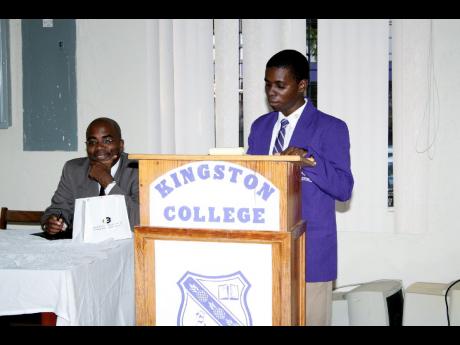 Curtis Martin (left), deputy group president, Capital and Credit Financial Group, listens during the vote of thanks from D'Oyen Nelson after a rap session with a group of sixth-formers at his alma mater, Kingston College, recently. - Contributed

DEPUTY GROUP president of the Capital and Credit Financial Group, Curtis Martin, had some words of encouragement for a group of sixth-form students at his alma mater, Kingston College, recently.

During the visit, geared towards the senior students preparing to leave high school, Martin urged them to undertake critical analysis of their own situations, remain constantly vigilant and structure their lives to take advantage of opportunities.

"Coming from humble beginnings is no excuse not to excel," he told the group in an hourlong rap session in the school's boardroom.

The transition from secondary school to pursue tertiary education and work, said Martin, may prove challenging for many students.

"When social and economic factors come into play, the transition becomes increasingly difficult. This is why we adults have to play an active role in guiding our youth," stated Martin.

According to the bank president, people do not need to go after the 'typical' jobs. "Sometimes you need to think outside the box and find a niche," Martin encouraged them.

He credited his success to his decision to not conform to the standard expectation of pursuing a 'typical' career immediately after high school. Instead, he "had a goal and a vision to excel and worked hard to achieve it", thus becoming one of the country's youngest chief executive officers in the banking industry at the time of his initial appointment.

"Yes, you have to be bright, but you also have to be smart," Martin told the students, adding that everything he learned in university became relevant in business and life in the years that followed.

"You have to apply all that you will learn to solve difficult problems and to also come up with creative and innovative solutions in more ways than you think; so make good use of the knowledge you will acquire," he urged.

Martin also encouraged students to take advantage of scholarships, like he did.

Since 1996, Capital & Credit has been heavily involved in improving Jamaica's education sector through its scholarship programme and sponsorship of other major initiatives.

'Sometimes you need to think outside the boxand find a niche. ... You have to apply allthat you will learn to solve difficult problems and come up with creative and innovative solutions.'