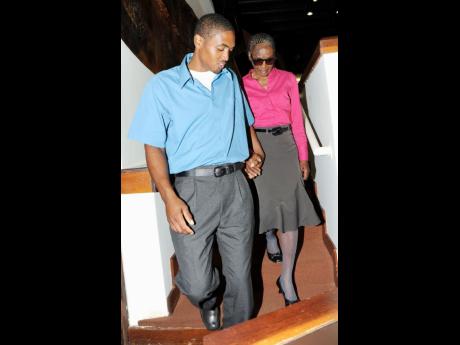 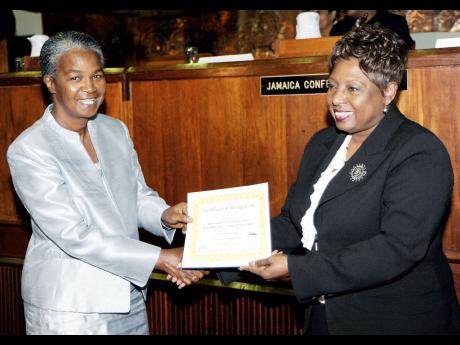 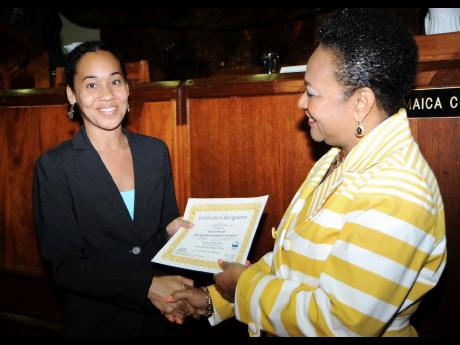 Shauna Brandon (left) one of the young women awarded for her contribution to community development, collects her certificate of recognition from Maria Jones, permanent secretary in the Ministry of Youth Sports and Culture. 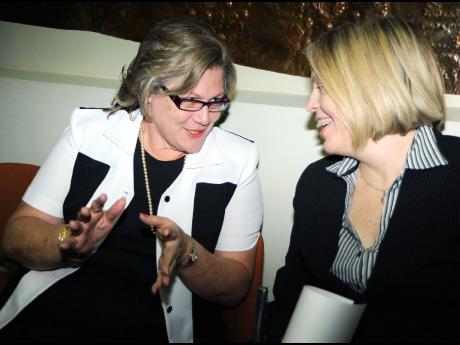 Dr Denise Eldemire-Shearer (left) in conversation with Scotiabank's Anya Schnoor at the event.
1
2
3
4

The year will focus on women's rights as human rights, under the banner 'Women and Power: Towards a world of equality'. The year of women came out of the OAS 2007 General Assembly.

The theme for this year's IWD, was, 'Equal Rights Equal opportunities: Progress for All'. Throughout the morning, the recurring theme was how much women have achieved, but how much there was still to be done. Dr Hernando Agudelo, director of United Nations Population Fund subregional office of the Caribbean, called gender equality one of the "greatest challenges of our time".

But Minister of Youth, Sports and Culture with responsibility for gender affairs Olivia Grange said she was optimistic of the future when she looked at the women who were present. She thought it was a time to highlight the plight still faced by women and girls around the world, but it was also a time of celebration. The Bureau of Women's Affairs honoured 61 Jamaican women who have been trail-blazers in their fields, and who continue to shatter the proverbial glass ceiling in various sectors.

Among the awardees were Jamaica's first Deputy Commissioner of Police Jevene Bent; first female pilot, Maria Ziadie-Haddad; and Lieutenant Judy-Ann Neil, the first female boat captain at the Jamaica Defence Force. There were also women who were not the first in their fields, but still doing tremendous work that needed to be recognised.

So despite the struggles, as Reverend Dr Pauline Mullings said in her prayer, "It's a blessing to be born a woman."