A mom's fight to save her child 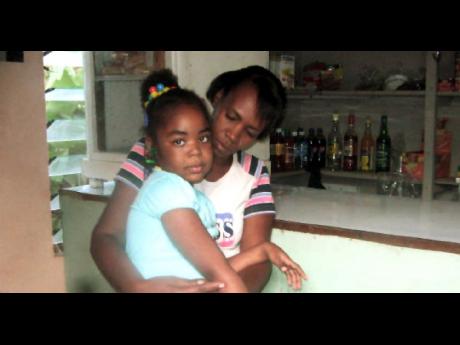 Lorna Smith sits with daughter Natalee in her shop. - Photo by Nedburn Thaffe

A mother is in a race against time to save the life of her ailing five-year-old who has been diagnosed with a string of medical complications.

Lorna Smith told The Gleaner that since last year she has been pulling out all the stops to keep her daughter's heart pumping.

"At times, I have to choose between sending my teenage daughter to school, paying the bills and finding the $4,200 to purchase her medication," Smith said.

Just days after her first day at Cathedral of Praise Basic School in Mandeville, Manchester, young Natalee Reid was diagnosed with rheumatic heart disease, congestive heart failure, acute endocarditis, and a complication that causes narrowing of the throat.

The bubbly five-year-old has not been to school since and is to undergo two major operations. Doctors say Natalee needs to undergo cardiac surgery to reverse the damage to her heart valves, stemming from chronic rheumatic fever.

More urgently, doctors are working to put a stop to her "narrowing throat condition" which has made breathing a painstaking task, the child's mother said.

Smith said the doctors told her that if the condition persists, it could fatally cut off her oxygen intake.

In the meantime, Natalee is being treated with medication that doctors hope will combat the condition. The alternative is a nine-hour operation on her throat that doctors fear will be too burdensome for her already failing heart.

"They (the doctors) say because her heart is so frail, they are concerned about doing any form of surgery on her at the moment as she might not survive," said Smith, her voice trembling.

She said her daughter's condition was taking a toll on her business and added that she was struggling to find the money to purchase medication.

"I got a prescription for her first dose of medication that she already took. She should be on her second (dosage) from two weeks ago, and I don't see the first cent right now," the mother lamented.

With her electricity now disconnected, Smith has developed creative methods of storing medication which must be kept refrigerated.

"Right now, my light cut off because mi cannot pay the bill ... . I have to collect ice from my neighbours and store some of her medications in an igloo ... . If dem spoil, that is another money again," the mother said.

At the moment, Smith is also concerned about settling her daughter's medical bill at the University Hospital of the West Indies (UHWI), which she said has amounted to more than $1 million.

She is asking for the public's assistance in helping her settle her bills and purchase medication.

When The Gleaner made checks at the UHWI last Friday, officials at the hospital, without providing details of the child's condition, were able to confirm her illness.

The Gleaner was directed to the child's paediatrician who, it is understood, is on leave.