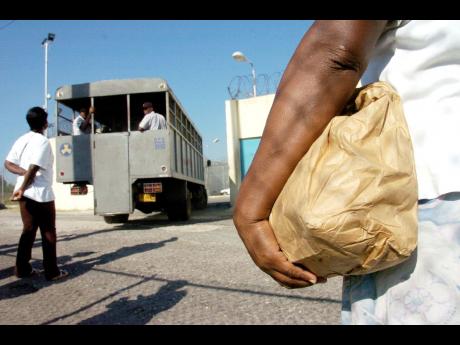 A relative of an inmate at the Horizon Remand Centre, Spanish Town Road, Kingston, stands with a bag filled with clothing for the prisoner. Though many Jamaicans believe bail should not be granted to prisoners charged with serious crimes, judges are constrained by the dictates of the Bail Act. - File photos 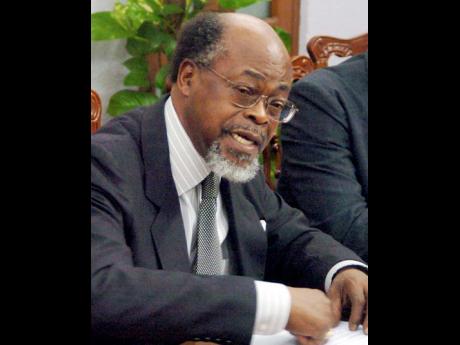 Public Defender Earl Witter(l) describes the act as a buttress for making decisions about bail.
1
2

THE GRANTING of bail in Jamaica, as in many jurisdictions, can be a vexatious issue, especially when it appears that the person is not deserving of reprieve.

Take, for instance, the outburst by National Security Minister Dwight Nelson over the bail of three persons in a kidnapping case more than two weeks ago. The minister had spoken with Attorney General Dorothy Lightbourne in the hope that she would convey his concerns to Chief Justice Zaila McCalla.

Nelson's position was, however, criticised by some members of the legal profession who said the comments amounted to interference from the executive in matters which were in the domain of the judiciary. Others said that the outburst meant that the Bail Act is still not fully understood.

The Bail Act of 2000 has 22 sections. Among the issues to which it refers are entitlement to bail, circumstances in which bail may be denied, general provisions relating to bail and the power of the judge in chambers.

Public Defender Earl Witter describes the act as a buttress for making decisions about bail.

"The Bail Act was designed to standardise the approach by judges and magistrates in the application of bail. The considerations and other matters that need to be taken into account for the awarding and refusing of bail are also closely delineated in the statute," he said.

"It does not contemplate or allow for any whimsical adjudication and the matter of bail is rightly placed within the discretion of the judge," he continued.

Witter said that from time to time, persons are outraged when accused persons are granted bail. However, he said that most times members of the public are ignorant of all the circumstances of the case. He said persons should remember an accused person is always considered innocent until proven guilty.

Attorney-at-law Bert Samuels, in reiterating Witter's stance, said the presumption of innocence was enshrined in the Jamaican Constitution. He also emphasised that the Bail Act stated that everyone has a right to bail, and while there are restrictions, the judge may not deny bail willy-nilly.

"It is very clear that everyone has a right to bail. Before, we didn't know why someone was denied bail, but now the judge has to tell us. What it means is that even with the most serious offences such as murder, the person can receive bail, given certain things," he said.

Here are some of the provisions of the act.

Subject to the provisions of this act, every person who is charged with an offence shall be entitled to be granted bail by a court, a justice of the peace or a police officer, as the case may require.

A person who is charged with an offence shall not be held in custody for longer than 24 hours without the question of bail being considered.

Subject to Section 4 (4), bail shall be granted to a defendant who is charged with an offence, which is not punishable with imprisonment.

A person charged with murder, treason or treason felony may be granted bail only by a resident magistrate or a judge.

Where the offence or one of the offences in relation to which the defendant is charged or convicted is punishable with imprisonment, bail may be denied to that defendant in the following circumstances

The court, a justice of the peace or police officer is satisfied that there are substantial grounds for believing that the defendant, if released on bail would:

(iii) interfere with witnesses or otherwise obstruct the course of justice, whether in relation to himself or any other person; the defendant is in custody in pursuance of the sentence of a court or any authority acting under the Defence Act.

The defendant is in custody in pursuance of the sentence of a court or any authority acting under the Defence Act.

The court is satisfied that it has not been practicable to obtain sufficient information for the purpose of taking the decisions required by this section for want of time since the institution of the proceedings against the defendant.

The defendant is charged with an offence alleged to have been committed while he was released on bail.

The defendant's case is adjourned for inquiries or a report and it appears to the court that it would be impracticable to complete the inquiries or make the report without keeping the defendant in custody.

In deciding whether or not any of the circumstances specified in Subsection (1) (a) exists in relation to any defendant, the court, a justice of the peace or police officer shall take into account:

(a) The nature and seriousness of the offence.

(b) The defendant's character, antecedents, association and community ties.

(c) The defendant's record with regard to the fulfilment of his obligations under previous grants of bail.

(d) Except in the case of a defendant whose case is adjourned for inquiries or a report, the strength of the evidence of his having committed the offence or having failed to surrender to custody.

(e) Whether the defendant is a repeat offender, that is to say, a person who has been convicted on three previous occasions for offences which are punishable with imprisonment; or any other factor which appears to be relevant, including the defendant's health profile.

Bail may be denied to a defendant who is charged with or convicted of an offence punishable with imprisonment if the court, a justice of the peace or police officer is satisfied that the defendant should be kept in custody for his own protection or, where he is a child or young person, for his own safety.

Bail may be denied to a defendant in relation to an offence which is not punishable with imprisonment if:

(a) It appears to the court or a justice of the peace that, having been previously granted bail in criminal proceedings, the defendant has failed to surrender to custody in accordance with his obligations under the grant of bail and there are reasonable grounds for believing that, in view of that failure, the defendant, if released on bail, would fail to surrender to custody.

(b) The court or a justice of the peace is satisfied that the defendant should be kept in custody for his own protection or, where he is a child or young person, for his own welfare.