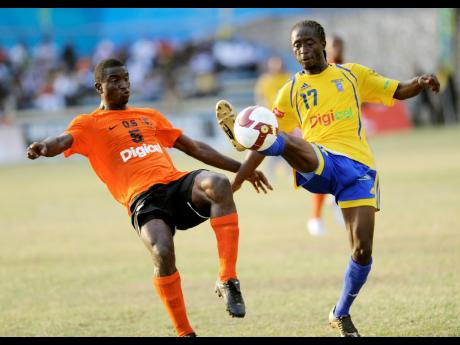 Portmore United, through a 20th-minute strike from Roen Nelson, clipped a youthful Waterhouse team 1-0at the Ferdie Neita Park yesterday and improved their chances of surviving relegation in the Digicel Premier League.

The win pushed Portmore to 33 points, while Waterhouse remained on 43.

Waterhouse, although having the better play in the first half, failed to score with Andre Clennon - one of five Under-21 players who started the game - getting the two best chances for the Firehouse team.

Clennon sent one shot whisking pass the goal and the other was saved by goalie Garice McPherson.

Nelson, who has not been able to secure many starts this season, rewarded the coaching staff by tapping in a Michael Binns cross in the 20th minute, much to the delight of the home fans.

"I think we worked extremely hard. Waterhouse is a quality opponent, they didn't just lie down and die, we scored one of our chances and we defended well," he said: "I think we just wanted it more than them."

Waterhouse's coach, Geoffrey Maxwell, thought his team dominated the game but faltered due to poor shooting.

"I thought we had better opportunities to put the game away from the first half," said Maxwell. "We dominated 75 per cent of the game and it ended up that they scored one chance and the game was all over."