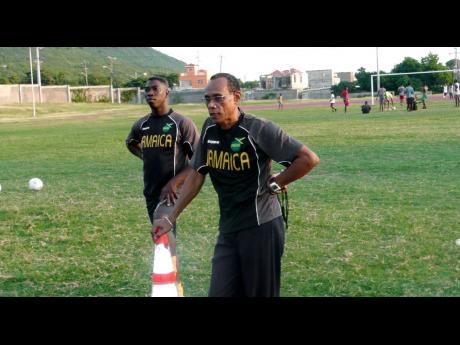 Jamaica's chances of reaching the Under-17 girls' World Cup in Trinidad & Tobago later this year were sunk on Saturday when Mexico thrashed them 3-0 in their second Group A match of the CONCACAF Finals.

It was the second straight defeat for the young Reggae Girlz, following a 4-1 defeat to Canada last Thursday at the Morera Soto Stadium.

"They just didn't play with any energy and just weren't challenging for the ball," said Jamaica coach Vin Blaine.

"But I can't be too hard on the young ladies, as they never had proper preparation coming into this tournament. They are unfit and it showed."

The result gave Mexico six points after two games and all but guaranteed their place in the semi-finals.

In the other match on Saturday, Canada upstaged Panama 2-1 following first-half goals from Haisha Cantave and Diamond Simpson.

Libany Alveo scored two minutes from time for Panama, but it was too little too late for the Central Americans.

The Jamaicans had managed to keep the Mexicans scoreless for a little more than an hour of playing time.

They had a few chances, mostly through Shenika Williams, on both sides of the half-time whistle.

Williams chased a pass in the 26th minute, but was bumped off the ball by a recovering Mexican defender Cristina Ferral as the two neared the goal.

Williams also had the best chance for her side in the 55th minute when Ferral collided with fellow central defender Lauren Reyes and both fell, allowing Williams to gather the ball and approach goalkeeper Cecilia Santiago alone.

Williams had Santiago at her mercy, but the Mexican net-minder just managed to deflect wide of the near post.

Jamaica's resistance finally broke in the 68th minute when Lucero Lara passed to her right to Christina Murillo, who took two touches before sending the ball wide on the right to an onrushing Daniela Salcedo to score.

The Caribbean side fell further behind when Lara added an insurance goal two minutes later after Diana Gonzalez sent a ball into the area for Maria Sanchez.

Jamaica's goalkeeper Shantel Graham raced off her line to defuse the danger, but the rebound fell at Lara's feet and she simply scored into an open net.

Graham's recklessness then allowed Gonzalez to tack on a third goal in the 76th when she drove a low-ball around the defensive wall from an indirect free kick from just inside the penalty area, following an ill-advised act from the Jamaican keeper.