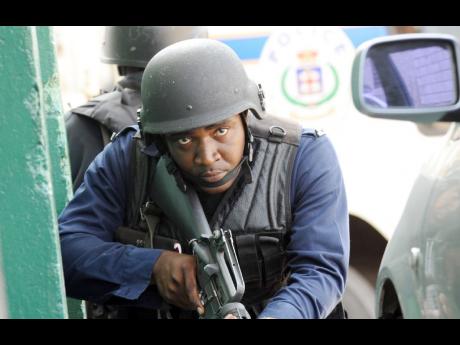 A policeman takes cover behind a vehicle as lawmen and gunmen engage in a shoot-out in Hannah Town yesterday.

ONLY HOURS after the curtains descended with a flurry on a birthday bash for embattled Tivoli Gardens community leader, Christopher 'Dudus' Coke, neighbouring sections of west Kingston exploded into a raging gun battle, involving members of the security forces and gunmen, which lasted for more than three hours.

In the midst of the mayhem, three civilians lay dead and three policemen were injured - all shot in the west Kingston community of Hannah Town.

As the Gleaner team, surrounded by soldiers and the police, watched the action from Hannah Street, screams reverberated from the lips of terrified students who were ushered out of the community by their parents as gunshots rang out without warning.

People scampered for cover as gunshots erupted, only to emerge later.

Alert policemen, well positioned with weapons, appealed to curious residents to go home as they had received information of a plan by gunmen to launch an attack from all angles on the lawmen.

As the police combed the area, a large contingent of soldiers arrived, while a Jamaica Defence Force (JDF) helicopter hovered.

A policeman told The Gleaner that they had received word that no less than 35 well-armed men were advancing along Spanish Town Road to join the battle.

The gunshots kept puncturing the air in Hannah Town and later, Denham Town joined in.

At the intersection of Blount and Hannah streets, in the vicinity of the City Mission Church in Hannah Town and across from Denham Town, police and soldiers scampered for cover as they surrounded the area.

The atmosphere was just as chaotic at the nearby Kingston Public Hospital (KPH).

Concerned colleagues of the policemen who had been shot paced the hospital grounds, while others maintained a vigilant watch.

Later, the three men who had been shot fatally were driven into the hospital - two in a marked police pickup and the other in a white patrol car.

Without warning, multiple gunshots erupted at the rear of the KPH, sending all scurrying, in search of a place to hide.

The police claimed that gunmen were shooting at the JDF helicopter.

Three women came in tow weeping and making accusatory gesticulations to the police, but they were warded off.

One woman who claimed to be a friend of the slain men said the men were in their beds sleeping, as they had just returned from a party.

The woman said the police kicked open the doors to their homes and shot them while they slept.

However, a statement from the police late yesterday said they came under heavy and sustained gunfire from a number of gunmen in the Hannah Town-Denham Town areas of the Kingston Western Division.

The police said the attack came on the heels of an operational initiative to capture two known gunmen who were hiding close to the border of Hannah Town and Denham Town.

The statement said both gunmen were shot and injured, but the police could not confirm the extent of their injuries.

According to the police, a Glock pistol and a ballistic vest were recovered.

The police say during the shoot-out, three policemen were injured, one in the hand, another in the leg and back, and the third in the neck.

Their condition is said to be stable.

The men were visited by acting Police Commissioner Owen Ellington.

In the aftermath of the shooting, the Gleaner team drove through Tivoli Gardens, which seemed serene in contrast to the mayhem in the neighbouring communities.

Industrial Terrace was devoid of traffic, but business along the thoroughfare was on in earnest.

In Denham Town, multiple roadblocks were mounted on all the streets leading into the community, including North, Charles and Beeston streets.