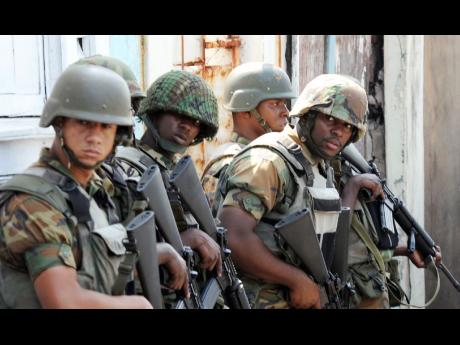 Jamaica Defence Force sol-diers use a fence to shield them as they prepare to enter the fray, as police and gunmen locked horns in Hannah Town, west Kingston, yesterday. - Photos by Norman Grindley/ Chief Photographer

Barefooted and still in a state of disbelief, one policeman involved in yesterday's fierce gun battle gave some of his colleagues a first-hand account of the firefight minutes after it ended.

Our reporter was nearby and heard the officer's account.

He said the police tried to get a key to the apartment where an alleged gunman was hiding, but were unsuccessful.

"(Name withheld) decide fi go in first, and by the time him go in, the bwoy jus' start fire.

"(Name withheld) bawl out seh, 'Oh! Oh! Mi get shot!'" he said, alluding to the officer who was shot in the neck.

With bullets still flying, he said seconds later, another police officer screamed out that he, too, had been hit.

"Yuh si because a tight quarters mi inna, wi cyaa get fi fire back ... . Mi haffi jam di door, and ah dat gi mi likkle space fi start buss it back pan di bwoy dem," he said, pointing out that one of the alleged gunmen was wearing a bullet-proof vest.