220 booths on offer at JMA/JEA expo 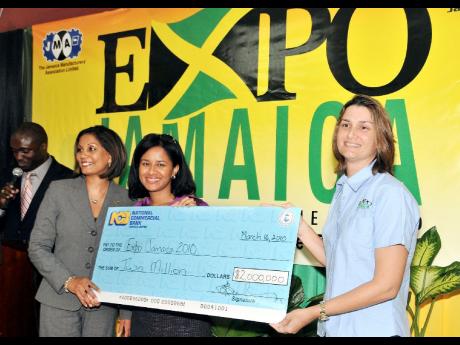 National Commercial Bank representatives (from left) Bernadette Barrow, assistant general manager, SME Division, and Sheree Martin, senior assistant general manager, Group Marketing & Communications, present a $2-million sponsorship cheque for the staging of the JMA/JEA Expo 2010 to treasurer of the Jamaica Manufacturers' Association, Jodie Summerbell, at the launch of the expo at the JMA offices in Kingston on Tuesday. - Contributed

The 2010 JMA/JEA expo will cost $20 million to stage, its organisers said Tuesday at the launch of the annual event, whose theme this year is 'Brand Jamaica to the World'.

Jamaica Manufacturers' Associa-tion (JMA) and Jamaica Exporters' Association (JEA), in partnership with Jamaica Trade and Invest, will be selling 220 booths, and expects that many products will be on display, including art and craft, chemicals, construction, cosmetics and pharmaceuticals, furniture and bedding, printing, packaging and labelling.

The show will be staged at its usual venue, the National Arena in St Andrew, from June 17-20.

Some of the cost of the exposition is being borne by sponsors, who together are putting up $6 million, Azan said — including National Commercial Bank, LIME, Jamaica Public Service Company Limited, GraceKennedy Limited, Lithographic Printers Limited, EXIM Bank, and the Ministry of Industry, Investment and Commerce.

Final payment on booths, 75 per cent of which are already sold, is due April 30.

JMA president Omar Azan used the opportunity to plug manufacturing's importance to the economy, while decrying that the country "spends $5.7 billion per week" on imports, while the manufacturing sector was performing far below target and its growth potential.

"There is the need for more creativity and commitment in fast-tracking the manufacturing sector," said Azan, whose company, Boss, makes furniture.

"The future of manufacturing is bright because the sector is resilient as it competes on the local and international stage, and against a tough external and internal environment," he said.

Vitus Evans, president of the JEA, urged Jamaicans to see Expo 2010 as the vehicle for reinvigorating manufacturers and exporters.

"The exposition is a vital tool in facilitating new market opportunities and encouraging Jamaican consumers to support our local brands and, ultimately, keep Jamaicans employed," he said.

He said as a result of the global economic meltdown, there has been a noticeable reduction in external demand for Jamaican goods and services, with the goods-producing and services industries registering a decline of 7.6 per cent and 0.7 per cent, respectively.