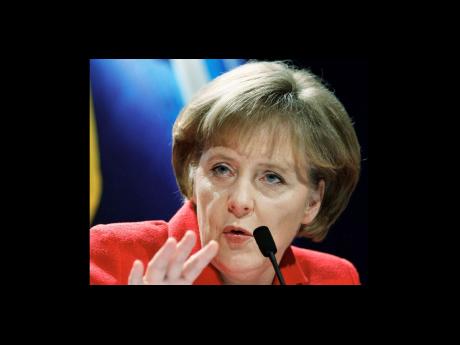 To European officials, financial derivatives are dangerous weapons that worsened Greece's debt crisis and should be curbed.

To Wall Street, they're tools that reduce risk and generate profits and should be left alone.

Now, regulators on both sides of the Atlantic are trying to figure out who's right and what to do about it. At stake are billions in profits that banks say would be threatened by too much regulation. Yet suppor-ters of tougher rules say the global financial system is at risk as long as derivatives remain largely unregulated.

Derivatives are instruments whose value depends on an underlying asset, such as mortgages or stocks. They can help hedge risks. But derivatives can also produce steep losses, or huge profits, if the value of their underlying asset sinks.

European officials say some derivatives are too harmful to be left alone. They warn they may ban some credit default swaps, a type of derivative that insures debt.

In a visit to Washington this week, Greece's prime minister argued that speculators were using the swaps to bet against his country's debt.

He said this has escalated Greece's borrowing costs, making it harder to dig out of its debt crisis.

The European Commission on Tuesday threatened to ban speculative trading of credit default swaps by investors who don't actually own a country's underlying debt.

These are called 'naked' trades. German Chancellor Angela Merkel called on the US to curb them.

But US regulators have resisted such calls. They favour only regulating the products, not curtailing them.

In Asia, some local regulators have expressed support for tighter oversight of derivatives markets, though there have been no sweeping changes.

Coordination of any derivatives regulation is vital.

Unless rules in the United States, Europe and Asia are synchronised, global traders inevitably would shift to wherever the most lenient rules exist.

Some experts think Asia, including financial hubs like Hong Kong and Singapore, for example, could attract more business if it maintained looser regulation.

The regulatory conflict is ripening as a Senate bill to overhaul the US financial system was being drafted.

His bill unveiled Monday creates restrictions for previously un-regulated exotic products and financial instruments. It requires hedge funds that manage more than US$100 million to register with the Securities and Exchange Com-mission. And it gives shareholders the right to cast a non-binding vote on executive compensation packages.

Derivatives are now largely traded among financial institutions with little transparency or regulatory oversight. Critics say this can lead to abusive and dangerous behaviour.

Speaking in New York last week, Gary Gensler, head of the US Commodity Futures Trading Commission, renewed his call for regulating the US$600 trillion global financial derivatives market. But he stopped short of endorsing Europe's call for trading curbs.

Whatever rules Congress proposes, Gensler said "there should be no such exemption for" credit default swaps. The swaps account for an estimated US$60 trillion of the derivatives trade.

The banking industry says it supports making derivatives less secretive but has lobbied against strict bans.

In a September speech in Germany, CEO Lloyd Blankfein of Goldman Sachs, one of Wall Street's biggest derivatives players, embraced the idea of clearing-houses. He said they would "reduce bilateral credit risk, increase liquidity and enhance the level of transparency through enforced margin requirements and verified and recorded trades."

But he warned against over-regulating credit-default swaps. He said the swaps "worked as they were intended to" during the financial crisis.

"If we simply ban customised derivatives to satisfy the perception that everything associated with these markets is bad, we run the risk of limiting ... business invest-ment and, ultimately, economic growth," Blankfein said.

In Asia, Japan's government is moving to boost transparency and lower risk to the broader financial system by requiring middlemen between buyers and sellers of certain derivatives. The middle-men, or central counter-parties, would enable regulators to monitor the system.

Officials in Hong Kong, meanwhile, have voiced backing for international efforts for oversight changes, noting the Group of 20's recommendations to require certain derivatives con-tracts be reported and traded on exchanges or other platforms.

"Asian regulators are not in the business of blindly following U.S. or European regulatory develop-ments," said Ewins, who leads the firm's financial regulations practice for Asia. "There remains suspicion, created during the market turmoil, of the 'Western model'."

About 15 per cent of the credit default market is linked to the debt of Asian countries and companies, according to an expert at the University of Hong Kong.

The main lobbying group for derivatives has also rejected calls for banning certain credit default swaps. It says the amount invested in the swaps cannot destabilise Greece because it represents only a small fraction of the country's outstanding debt.

Investors hold US$406 billion worth of outstanding Greek bonds, according to Citigroup. But they hold only US$9 billion in insurance against that debt through credit-default swaps.

Given the relatively small amount of swap bets, "it is difficult to conclude (they're) dictating price levels," the International Swaps & Derivatives Association said in a statement.