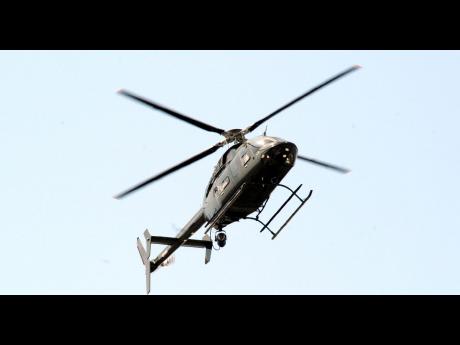 A Jamaica Defence Force helicopter hovers above west Kingston Monday, as gunmen and police trade bullets during an operation in the Hannah Town and Denham Town areas. 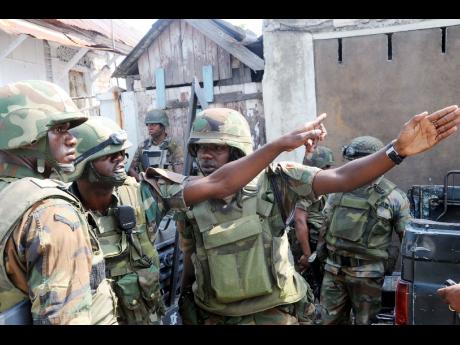 These Jamaica Defence Force soldiers point in the direction of gunshots in Hannah Town. 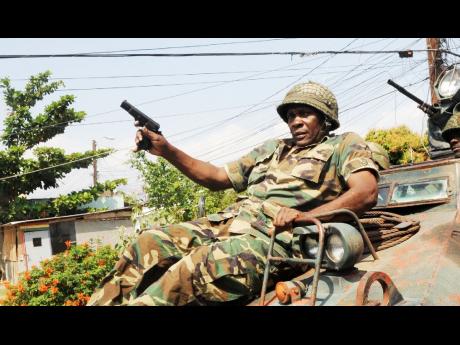 A soldier slides from an armoured vehicle as he gets ready for action in west Kingston on Monday. - photos by Norman Grindley/Chief Photographer
1
2
3

Still jolted by Monday's gun battle between the police and gunmen, residents of Hannah Town yesterday feverishly sought to distance their community from the clash which claimed the lives of three men. Three policemen were injured.

The people of Hannah Town maintained that the shoot-out involved the police and men from neighbouring Denham Town.

Yesterday, the two communities stood in stark contrast to the violent scene that it was on Monday.

Both Hannah Town and Denham Town were quiet, almost sleepy, as life limped back to normal.

Police vehicles with wary crime fighters on the ready patrolled the areas.

An armoured truck was parked on Rose Lane near the rear of the Kingston Public Hospital.

A few people walked the streets, while others sat at their favourite corner, a common pastime in both communities in normal times.

But the fear was noticeable in Hannah Town.

Some residents sought to re-enact the violent scene, where members of the security forces and gunmen clashed in the vicinity of Blount and Hannah streets.

"We have long separated that area; the border is on the hill," declared one woman. "The men were on the other side … the police and soldiers had to come into Hannah Town to get to the border where the men were," she added.

The woman pointed to a mound near the City Mission Church, where the people of Hannah Town had separated themselves from the residents of Denham Town because of the frequency of violent clashes between the two volatile communities.

Supported by another woman, the young mother admitted that she was sorely afraid of what was happening.

She said Hannah Town residents were frequent victims, as the area was smaller than Denham Town.

"These communities are not normal," she lamented.

The men appeared more wary and withdrawn, but the women spoke more openly, if in hushed tones.

Another female resident agreed that the men involved in the stand-off were from Denham Town.

She said the men who were killed were coming from the birthday bash held to celebrate Christopher Coke's 41st birthday.

But women who claimed to know the men said that they were asleep after the party, when they were attacked by the police.

They offered no explanation how three policemen were shot in the neck, hand, back and foot.

The celebrations reportedly ended minutes before 11 and the men were killed less than two hours later.

Other residents told The Gleaner that peace had returned to the community, but stressed that the people were still wary.

The streets leading from Spanish Town Road, which were blocked in numerous sections on Monday, were all cleared, with people and traffic moving as if nothing had happened.

In the meantime, the police have released the identity of one of three men who were taken to the Kingston Hospital during the mayhem.

The Jamaica Constabulary Force (JCF) has acknowledged the death of another at the hands of the security forces, but has not commented on the third man who was taken to hospital in a white patrol car.

The police say Kelly is a known member of the Colombia gang that operates in Olympic Gardens, St Andrew.

Kelly was reportedly wanted for several murders, including that of a two-year-old boy on White Wing Walk during an arson attack on a house, and was featured atop the most wanted list for the St Andrew South Police Division.

The JCF said Kelly was one of the men a team of police personnel tried to capture on Monday.