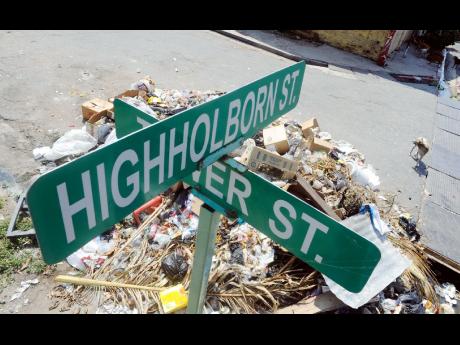 This pile-up of rubbish at the intersection of High Holborn and Tower streets could become a thing of the past after the Government's decision to increase money allocated to the collection of garbage in the country. - Ricardo Makyn/Staff Photographer

With garbage piling up in several communities across the island, the Government has allocated an additional $200 million to dispose of the waste.

This should come as good news to Joan Gordon-Webley, executive director of the National Solid Waste Management Authority (NSWMA), who on Monday told The Gleaner that a shortage of money was crippling the agency.

According to Gordon-Webley, the NSWMA had not received subventions from the finance ministry for five fortnights, and was owed millions of dollars and could not pay for the trucks needed to collect garbage.

"What we are finding out is that persons supplementing our fleet have withdrawn their trucks and tractors because they can't afford to pay for the petrol," Gordon-Webley told The Gleaner.

But the second supplementary estimates tabled yesterday show the Government almost doubling the money allocated for garbage collection and disposal, moving the allocation to the Local Government Department in the Office of the Prime Minister to $470 million.

The Local Government Department has also received a further $600 million to pay to the Jamaica Public Service Company for street lighting.

This has moved the budget of the Robert Montague-led department to $7.3 billion, up from $6.5 billion which was allocated in the first supplementary estimates.