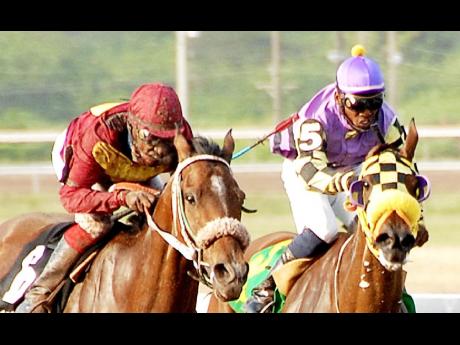 ALMUTAKAWEL (left), responds to the strong urging of Carlton Malcolm to blow past long-time leader PRINCESS LATOYA (Jodeien Anderson), to score an upset win in the four-year-old and up Restricted Allowance event, the eighth race over 1600m at Caymanas Park last Saturday. ALMUTAKAWEL went off at odds of 22-1. - Colin Hamilton/Freelance Photographer

Unbeaten CASSANOVA BOY goes for win number six at Caymanas Park today in the open allowance feature race for the Zaleucus Trophy, over 1800 metres, to be contested by seven starters.

This is one of three trophy races on the well-supported 10-race programme. The others are the $550,000-$500,000 claiming race for the City of Kingston Centenary Cup over 1600 metres to be contested by 14 starters, including top contenders ROYAL MAJESTY, ROYAL BLAST and WISE FIT; and the Long Shot Trophy over 1300 metres (claiming $180,000), in which nine are slated.

However, the focus of attention must be the Zaleucus Trophy in which the Wayne DaCosta-trained CASSANOVA BOY, under champion jockey Omar Walker, faces his sternest test to date.

He is pitted against 2007 Derby hero, THE BOMBER, and last year's shock Superstakes winner, HOMBRE. Both finished a close-up third and fourth, respectively, to the 2009 Derby winner HE'S REALLY OK, in the February 27 Legal Light Trophy over 1820 metres.

Both are not only fit, but ideally suited to the distance, and should give the impressive CASSANOVA BOY, now stepping up in class, a run for his money.

Still, coming off a stakes record run in the valuable King's Plate over 1500 metres (1:31.1) on February 6, CASSANOVA BOY is potentially the best horse in the country, and nothing but a win will quench his insatiable appetite.

The grey son of Najran-Gender Bias has the speed to outrun both HOMBRE and THE BOMBER, who are no slouches. I doubt either can beat him, coming from behind, in this small field.

CASSANOVA BOY continues to look the part at exercise in his preparation and should be followed until his colours are lowered.

Meanwhile, the in-form ROYAL MAJESTY under title-chasing jockey Paul 'Country' Francis, is tipped to make it four in a row in the City of Kingston Centenary Cup.

Trained by Everal Francis, the six-year-old horse by Law Of The Sea out of Michele's Magic posted his second straight win over this trip on January 9, staving off ROYAL BLAST by half a length in a driving finish on a $525,000 claiming tag.

ROYAL MAJESTY renews rivalry with ROYAL BLAST on 1.0kg better terms and, having worked well in preparation for this trophy, should extend his winning streak at the expense of ROYAL BLAST, recent winner WISE FIT and EL DIABLO.

Other firm fancies on the card are down-in-class NATURAL HEART, having won two of his last four races, to catch CASH PAT and CHARLIE CHAPLIN in the Long Shot Trophy; GREEN HORNET in the second; THE KING AND I in the fourth; SUGAR'S IMAGE in the fifth; GRAND ELANI in the sixth; and DOUBLE THE HONEY in the ninth.