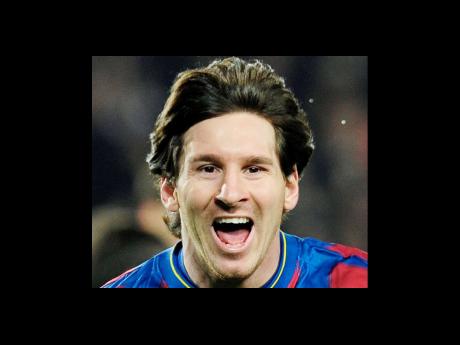 "He was so decisive," Barcelona coach Pep Guardiola said of Messi. "Every great has a tendency to influence his team, like (Michael) Jordan with the Bulls. He's the best. We wouldn't trade him for anybody."

The Argentina star, who scored three times against Valencia in the Spanish league on Sunday, should have had another hat-trick in the 86th minute when he dribbled past three men but rolled the ball wide of goal.

"His ability is incredible when you consider his age," Stuttgart coach Christian Gross said of the 22-year-old Messi. "I think it's fair to compare him to (Diego) Maradona."

Leading 1-0 from the first leg, Bordeaux scored a goal in the fifth minute from a bending free kick by Yoann Gourcuff. Kostas Mitroglou replied for Olympiakos with a long-range drive, but Marouane Chamakh added an acrobatic headed goal for a 3-1 overall victory.

Bordeaux coach Laurent Blanc said that having two teams in the last eight was a sign of a revival in domestic French football.

"You can think that because of the teams now qualified for the Champions League quarter-finals, and those doing well in the Europa League, that this proves that French football is in good shape," Blanc said.

"But to confirm this, we will have to see how this develops over time to see if this can happen again and to see how regularly French teams get through to the quarter-finals."

Barcelona and Bordeaux join Manchester United, Arsenal, Bayern Munich, Lyon, Inter Milan and CSKA Moscow in the last eight. The draw for the quarter-finals and semi-finals will take place tomorrow at UEFA headquarters at Nyon in Switzerland.

Three English clubs have made it to the semi-finals in the past two seasons, but only Manchester United and Arsenal have survived to the last eight this time. With no seeding system to keep them apart, they could be drawn to face each other. The same applies to French clubs Lyon and Bordeaux.

Inter Milan are trying to win the title for the first time since 1965 and is coached by Jose Mourinho, who won it with FC Porto in 2004 and knocked out his former club Chelsea on Tuesday. Arsenal, Lyon, Bordeaux and CSKA have never won the competition.

Even without Xavi, who was out with a calf injury, Barcelona had too much talent for Stuttgart at Camp Nou.