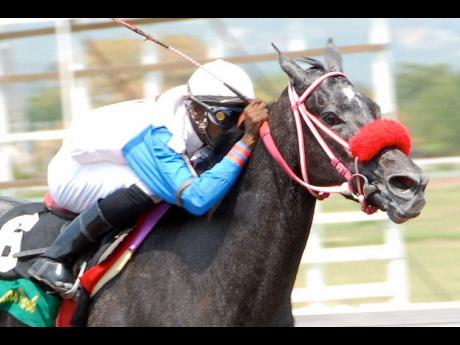 The unbeaten CASSANOVA BOY (Omar Walker) cruising to his sixth consecutive win in the opening race for the Zaleucus Trophy over 1800 metres at Caymanas Park yesterday. - Colin Hamilton/Freelance Photographer

Their other winners on the 10-race programme were 1-9 favourite THE KING AND I in the sixth race over 1100 metres for maiden three-year-olds; and the lightly raced American 3-y-o colt, DOUBLE HONEY, who raced only the clock (made all) in the ninth race over 1100 metres for imported three-year-olds and up, stopping it at an eye-popping 1:04.1. The splits were 22.4 and 45.2 for the first half-mile.

While DOUBLE HONEY - who made it two from two - was truly impressive in winning by 9 1/2 lengths from the highly fancied RONRON, CASSANOVA BOY stamped himself as perhaps the best horse in the country when slamming last year's Superstakes winner HOMBRE by 43/4 lengths in the opening Zaleucus Trophy race over 1800 metres, with the 2007 Derby winner, THE BOMBER, finishing third.

Offering odds of 1-5 in a field of seven, the four-year-old grey gelding by Najran out of Gender Bias was content to chase the early leader HOMBRE until sent through leaving the half-mile. Thereafter, the issue was never in doubt as he cruised home in the smart time of 1:51.0 to equal the stakes record time set by THE VICEROY in September, 1989.

DaCosta was more than pleased with the performance, even though admitting that the horse "wasn't trained to the maximum for this race".

He added: "I thought he was sharp enough to take care of this field despite having to carry top weight. He is now 6-0 and will take on grade-one company in his next assignment ... possibly the Eros Trophy over 1400 metres or the Bonnie Blue Flag Trophy over 1820 metres in the weeks ahead."

Meanwhile, the Tony Kirlew-trained WESTERN GENIUS (17-1) came from a seemingly hopeless position, after walking out badly at the start, to score an upset win in the $550,000-$500,000 claiming race for the City of Kingston Centenary Cup over 1600 metres. The 4-y-o filly was ridden by Carlton Malcolm.