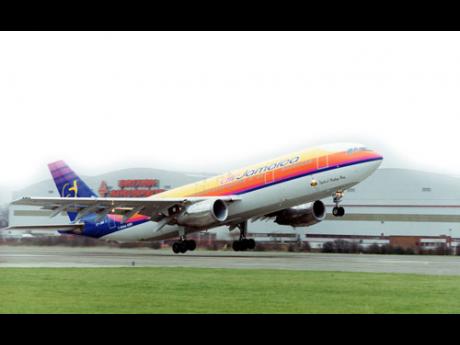 National carrier Air Jamaica this week laid off 10 pilots and 100 flight attendants, but union representatives said Thursday that the cuts were expected and not directly associated with the pending deal with Caribbean Arlines Limited.

The jobs of the entire staff corps will be made redundant effective April 12.

Kavan Gayle, president of the Bustamante Industrial Trade Union (BITU), told the Financial Gleaner that the redundancy was linked to the cut in routes, which was announced last month.

"This is just a layoff procedure because you don't require the excess number to operate based on the present requirements," he said.

The national carrier, whose profitable routes are being acquired by Trinidad-based Caribbean Airlines, said February that it would cease flights to Grenada, Curaçoa, Nassau and Havana.

The airline said it would no longer service the New York/JFK to Grenada, and Jamaica to Orlando and Chicago, routes as of April 12.

Gayle said the cuts were not a surprise because they were included in the company's business plans.

"The fact that these changes come into effect, it does not require the number of crew to operate the new requirements," he said.

The pilots and flight attendants started getting their job-cut letters on Wednesday, but Gayle said the distribution would continue into today.

But Bruce Nobles, president and chief executive officer of Air Jamaica, declined to speak of the layoffs.

"I am not commenting on that," he said, when pressed by the Financial Gleaner.

Air Jamaica is less than two weeks away from closing the deal with Caribbean Airlines, assuming the March 31 deadline still holds.

The deal has its critics both in Jamaica and Trinidad, where media reports now are raising concerns about the transition costs that Trinidad could face because of the acquisition.

Air Jamaica, which is more than US$1 billion in debt, is expected to close down operations on April 12 for Caribbean Airlines to set up operations.

The Jamaican Government has said it will be paying out US$300 million, or J$27 billion, in redundancy payments as a result. Some of the staff are expected to be re-employed by Caribbean Airlines (see Page 5 for related story).

Gayle said the 110 workers laid off this week would get their severance pay on April 12, alongside the other staff.

But: "My understanding is, if they want it now, they can get their redundancy monies. They can apply for it," he said.

He is also insisting that all outstanding payments to the National Housing Trust and National Insurance Scheme owed by the airline be paid over to the statutory agencies ahead of the winding up of the airline. The size of those liabilities was not disclosed, but Gayle said it amounted to "millions".