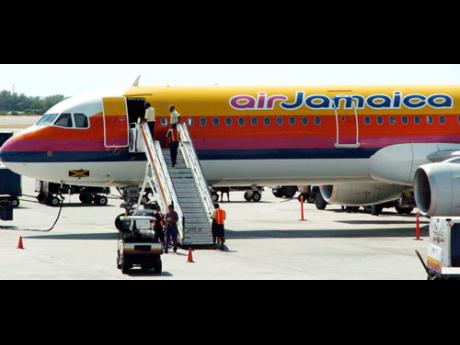 Air Jamaica plane on the tarmac of the Norman Manley International Airport in Kingston, in this November 2004 photo. - File

Caribbean Airlines officials continue to interview Air Jamaica staff from as-yet-to-be-determined positions in the new 'Air Jamaica/Caribbean Airlines' entity, on which a deal is to be finalised by month end for permission to fly five of the Jamaican carrier's 'profitable' routes, as Trinidad Minister of Works Colm Imbert put it.

But with negotiations still under way, airline workers have not been advised what the new operation will be called and the number of staff likely to be re-employed under the new structure after their redundancy on April 12.

It is important to note that Air Jamaica Limited does not have any employees.

The staff are employed to Air Jamaica Holdings Limited, the entity being closed down.

Union and pilot association representatives have confirmed cuts of 10 pilots and 100 other staff this week, but the latter were said not to be related to the Caribbean Airlines Limited (CAL) deal.

Air Jamaica Limited holds the Airline Operating Certificate, the JM IATA code, and is designated as the Jamaican national carrier, and holds the foreign carrier permits granted by the Federal Aviation Administration to fly to the United States.

Sources close to the negotiations have told the Financial Gleaner that intense efforts are being made to work out a wet-lease arrangement between Air Jamaica Limited and CAL which would see Air Jamaica continuing to fly six of its leased aircraft using the existing Airline Operating Certificate and IATA code.

Air Jamaica will operate the routes for CAL on a fixed-price basis per block hour - payable by CAL.

In such an arrangement, the Government of Jamaica (GOJ) continues to be at risk for the period of the wet-lease contract.

However, this risk is limited to the GOJ's ability to deliver the terms of the wet-lease contract to CAL at the agreed price.

On the other hand, CAL will be at risk for the difference between the revenues and the costs generated by the Jamaican operations during the period of the wet-lease arrangement.

Any revenue shortfalls will have to be made up by CAL and, ultimately, the Government of Trinidad and Tobago (GOTT) as the principal shareholder of Caribbean Airlines. In addition, the Financial Gleaner understands that GOTT will be responsible for providing the fuel hedge guarantee for the Jamaican operations of CAL on the same terms as is provided to CAL at present, based on US$50 per barrel.

While Jamaica and Trinidad continue to try to hammer out an arrangement for CAL to provide limited airlift out of Jamaica to the United States and Canada, the government of Guyana has been voicing its dissatisfaction with the quality of service and the pricing of airline tickets for service provided by the Trinidad carrier.

This is an issue that has been festering for several months.

However, in the sharpest comments made to date on the matter, Guyanese President Bharrat Jagdeo indicated concern last week about the recent rise in the cost of airline tickets, which now means that travellers sometimes pay significantly higher prices for travel from Guyana to Barbados and Trinidad on the monopoly service provided by CAL as compared with travel between, say, Trinidad and New York.

In fact, President Jagdeo said that if CAL could not modify the airline ticket prices sufficiently, his government may have no option but to re-enter the airline business and offer a shuttle service from Guyana to Trinidad and Barbados, or invite other airline carriers to provide additional service.

Caribbean Airlines' response so far to the complaints from the Guyanese government has been that the increase in airfares on some of its routes does not apply to Guyana alone.

In other developments, the Financial Gleaner understands that preliminary discussions have been initiated between LIAT, the Eastern Caribbean regional carrier, and Caribbean Airlines regarding a mutual cooperation agreement.