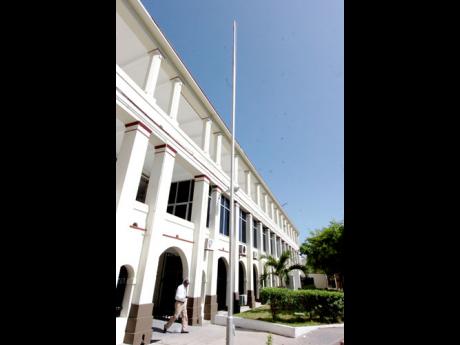 The Supreme Court Building in Kingston, and seat of Jamaica's Court of Appeal. - File

The Appeal court has given American businessman Richard Vasconcellos the green light to recover more than US$546,000 from local firm Jamaica Steel Works and its principals, Ishmael and Amelita Gafoor.

The judgment, unless overturned, has clarified the law on how the decisions of foreign courts can be enforced here when people on the receiving end claim the rulings were based on fraud.

The Gafoors have already filed notice of their plan to appeal the decision before the United Kingdom Privy Council, the final arbiter of cases emanating from Jamaica.

"It is patently clear from the authorities that fraud which misleads a court into taking jurisdiction may be raised at any point in time and may bar enforcement of a foreign judgment," Justice Karl Harrison, writing on behalf of the court, said in the ruling delivered this week by the Jamaican Court of Appeal.

"However, in my judgment, there must be basis for the allegation of fraud."

In their ruling, Justices Harrison, the court's president, Seymour Panton and Mahadev Dukharan, who comprised the panel that heard the case, said Amelita Gafoor, who claimed that her signature was forged on a loan-guarantee document, patently failed to meet that bar.

This case had its genesis nearly a decade ago, in 2001, when Jamaica Steel Works, formerly Jamaica Steel and Plastics Limited, received a loan for US$500,000 from a Florida bank, Commerce Bank of Coral Gables.

The guarantors of the debt were the Gafoors, as well as Vasconcellos, who runs a company named ANK Enterprises, and his wife.

In 2003, Jamaica Steel Works defaulted on the debt and Commerce Bank sued the company and the guarantors in a Florida court.

However, the proceedings against Vasconcellos and his wife were adjourned to allow for mediation. Mrs Gafoor gained permission to be part of the mediation process, but did not participate.

In the end, Vasconcellos reached an agreement with the bank to pay US$400,000 to settle the guarantee signed by him and his wife and soon afterwards obtained a default summary judgment in Florida for US$402,832.27, inclusive of costs and interests, against Jamaica Steel Works and and the Gafoors.

Further, in January 2006, Commerce Bank of Coral Gables assigned to Vasconcellos all its rights, titles and interests in the judgment against the Gafoors and their company.

He soon sought an enforcement judgment in the Jamaican courts, claiming $546,884.63, plus interest of seven per cent for annum from April 2005 until payment.

The Gafoors resisted the move.

Mrs Gafoor not only claimed that she never gave Vasconcellos the authority to negotiate a loan on her own or the company's behalf, but also that her signature on the guaranty document was a forgery.

She said in an affidavit that she had not participated in the mediation because of circumstances beyond her control.

In any event, she held, the summary judgment against her was vitiated by fraud and the fact of a breach of natural justice given the absence of a fair trial.

In the Jamaican Supreme Court, Justice Donald McIntosh rejected Mrs Gafoor's allegation of breach of natural justice, saying that she had "every opportunity to be heard" and had "deliberately placed herself in contempt of court".

He nonetheless ruled that the order of the Florida court could not be enforced here.

Said the judge: "... As repugnant as it is, this court finds itself constrained to dismiss this application based on the authorities which maintain that once there is an allegation of fraud made to impeach a foreign judgment, that judgment will not be enforced by our courts even if the foreign court purportedly dealt with the issue of fraud."

But at appeal, Hilary Phillips, QC - who has since been named anappeal judge - argued on behalf of Vasconcellos that Justice McIntosh had misdirected himself.

Essentially, Phillips argued that there was new thinking, both at the Privy Council and in other Commonwealth nations, on the old English cases that made it easy to impeach the judgments of foreign courts - on a claim of fraud - once there was an attempt to enforce them in domestic jurisdictions.

The appeal judges agreed, arguing that Mrs Gafoor had not only failed to allege who committed the fraud against her, but had been fully aware of the action in the foreign court and of the allegations pertaining to jurisdiction.

"... It is my view that failure to prosecute her defence cannot now be relitigated in these courts," Justice Panton said.

It was her burden, he argued, to demonstrate that either there was fraud that misled the foreign court into assuming jurisdiction or that there were "new material facts suggesting fraud that were previously undetectable through the exercise of reasonable diligence".

But she failed to establish either, the judge held.

"It is, therefore, my judgment that the learned judge (McIntosh) was plainly wrong when he held that once an allegation of fraud is made to impeach the foreign judgment, that judgment will not be enforced by our courts, even if the issue was purportedly dealt with foreign proceedings," said Justice Panton.

"It is further my judgment that there must be evidence, and not merely a bare allegation which discloses at least a prima facie case of fraud."

The court said further it mattered not that the foreign judgment was obtained by default provided that the proceedings were conducted in a fair manner.

The appeal was allowed and legal costs awarded against the respondents.