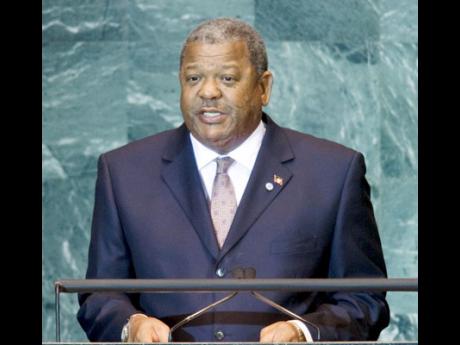 Baldwin Spencer, Prime Minister of Antigua and Barbuda ... has instructed his ambassador posted in Washington to engage US lawmakers on the issue. - File

American victims of the Stanford Financial Group are pressing for the blocking of funding and a travel boycott of Antigua and Barbuda, in a sustained campaign to have the superpower and the multilaterals over which it has sway penalise the small island over the alleged scheme perpetuated by their countryman.

Their lobby has reached the United States Congress, with resolutions now introduced in both the House and Senate aimed at cutting off 'aid and trade' to the twin-island state whose population numbers approximately 85,000.

The finance committee of the Lower House is soon to vote on a resolution introduced Monday asking the US secretary of the Treasury to direct the International Monetary Fund (IMF) and the World Bank to turn off funding to the government of Antigua and Barbuda - part of a concerted campaign by the Stanford Victims Coalition, an advocacy group representing 28,000 investors who claim they suffered "collateral damage" as a result of the alleged fraud perpetrated by indicted Texas billionaire Sir Allen Stanford.

Antigua is in negotiations with the IMF for a 36-month, US$124 million loan, equivalent to SDR 81 million, which passed its first hurdle on Tuesday when Fund staff approved the facility. The final arbiter will be the IMF board.

Monday's resolution also demands that the Baldwin Spencer administration release to the US receiver overseeing the liquidation of Sir Allen's estate 49 properties it has reportedly taken action to expropriate.

And it called for the repaying of loans made by Sir Allen "or any Stanford entity," as well as "payments made to officials of the government of Antigua and Barbuda for the purpose of subverting regulatory oversight", the latter an apparent reference to allegations by US prosecutors that former Antigua financial regulator Leroy King was bribed with more than US$100,000 to mislead investigators.

But Prime Minister Baldwin Spencer says he refuses to be drawn into a squabble with the group.

"We're staying on course and we don't want to get into a fight and into a fray internationally," Spencer told Caribbean Media Corporation.

"I mean, we know that the, basis upon which these people are moving doesn't have any foundation, but, at the same time, we recognise that the image of Antigua and Barbuda internationally is being called into question."

The advocacy group said its 'Anti-Crime, Anti-Antigua' campaign also calls on travel professionals, prospective tourists and investors from around the world to boycott Antiguan hotels and resorts, cruises, and investments in companies and ventures.

"When Antigua is ready to make things right and release the assets that were purchased with Stanford victims' investments, the SVC will stop its efforts to expose Antigua for its corrupt actions," said Angela Shaw, SVC executive director, in a statement.

"When the crime stops, so will we. Until then, we will pursue every effort we possibly can to warn potential tourists, developers and investors about the dangers of Antigua."

The SVC said that a second resolution on the issue was introduced in the US House by Representative Mike Coffman of Colorado, and that another sponsored by eight senators in December awaits a vote by the Senate foreign relations committee.

Spencer said that his government has directed its ambassador in Washington, Deborah-Mae Lovell, to meet with members of the US Congress on the matter.

"Our position is clearly they don't have any basis for what they're saying, and the fact of the matter is if they claim that they are victims, Antigua and Barbuda is also a victim in this matter, because, clearly, we have sufferedimmensely as a result of what has happened," Spencer said.

"I can assure you that we are doing what we consider to be necessary, not to make a lot of noise and to be issuing threats and so on out there, but to address the matter in a manner that, at the end of the day, we know that our position will be vindicated."

Sir Allen, whose financial group operated from both Antigua and the US, is on trial in Houston, accused by US authorities of operating a US$7-billion Ponzi scheme.

Antigua has had trade run-ins with the US in the past over Internet gambling.

The small-island state came out ahead in that dispute fought before the World Trade Organisation but it was a pyrrhic victory in which it scored in late 2007 an award of a minor US$21 milllion per year in sanctions against the US, instead of the US$3.4 billion sought.