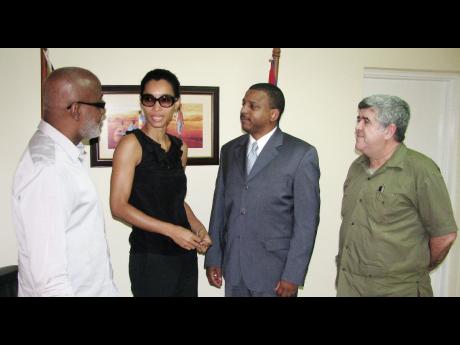 In a bid to strengthen cultural exchanges and cooperation between countries in the Caribbean, executives of Pulse Investments Limited, organisers of Caribbean Fashionweek, met with Cuban officials this week to discuss that island's participation and representation at the annual regional event.

Cuban Ambassador to Jamaica, His Excellency Yuri Gala Lopez, expressed keen interest in the event and also pledged Cuba's support for Pulse's newest creative industry initiative - 'The Haiti Art and Fashion Project'. Announced at the 10th anniversary launch of Caribbean Fashionweek (CFW), the Haiti Art and Fashion Project will support the rehabilitation and further development of Haiti's creative arts, fashion and business industries, which were dealt a major blow in the wake of the 7.0-magnitude earthquake.

Ambassador Lopez, who attended the launch of CFW 10, was impressed with the project and offered to render his consulate's assistance where possible. Lopez commented that Cuba could relate to Haiti's crisis, having being heavily impacted by Category Four Hurricane Gustav in 2008, as well as he could testify to the overwhelming importance of a nation's creative industry.

"The Isla de la Juventud (Isle Of Youth) was ravaged by Gustav, killing thousands of people and destroying homes and families. During our time of tragedy, it was the artistes who boosted the morale of the victims and who rallied together to uplift the spirits of the people. The impact that the creative industry had on an ailing nation was profound and we can understand the overwhelming importance of the Haiti Art and Fashion Project and how necessary it is to restore and develop this sector," he said. The ambassador further noted that Cuba had worked systematically with Haiti for the past several years, in an effort to aid development there.

In addition to the Ambassador's endorsement of the Haiti Art and Fashion Project, he also indicated that Cuba would be facilitating the participation of a delegation of designers, models and performing artistes from that country to participate in CFW. Pulse will also support the delegation's presence at CFW. Pulse CEO Kingsley Cooper noted that it will be Cuba's first time participating in the event and it is "for a good purpose, to raise funds and awareness for Haiti's restoration and development of its creative industries."

The Haiti Art and Fashion Project is spearheaded by the Pulse Foundation, with the support of Caribbean Fashionweek (CFW), The Caribbean Fashion Industry Association (CAFIA) and participating art, music and fashion industry entities in the region. As a Caribbean-based and organised initiative, the project will focus on medium to long-term reconstruction and development of Haiti's creative arts and business. It will be managed by the Pulse Foundation headed by Jamaican entrepreneur, artist and honorary consular to Lithuania, Lois Lake Sherwood.

Sherwood, who is of Haitian and Jamaican descent, has chaired the Pulse Foundation since its inception six years ago and will work alongside the board of trustees, which includes Jeffery Cobham, former banker, chairman of the NDTC and past chairman of the Edna Manley College of the Visual and Performing Arts, and Myrtha Desulme, president of the Haiti-Jamaica Society. The foundation will also include representatives of the Haitian government and members of its creative industries.

The Haiti Art and Fashion Project has been endorsed by the Government of Haiti.