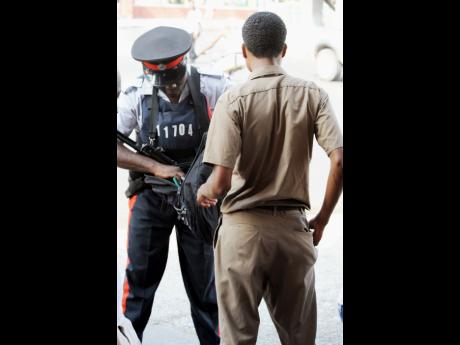 This policeman goes through a schoolboy's bag during a search of several students in downtown Kingston on Tuesday. - Norman Grindley/Chief Photographer

ALL FETES and marches planned for next weekend's Boys and Girls' Athletics Championships have been banned by the police as part of their plan to stem the violence associated with one of the most popular events in Jamaica.

"We have decided to ban all pre- and post-Champs fêtes and also marches. This is an attempt to ensure that we reduce opportunities for violence," explained acting Deputy Commissioner of Police Glenmore Hinds.

Hinds said the police were aware of a number of occurrences which took place recently involving students from several Corporate Area high schools.

He said some of these incidents only came to the attention of the police yesterday.

Hinds did not give details of the happenings and would not name the schools involved.

However, he said all of this has "given us the view that we need to take action to at least prevent these incidents from going into Champs".

The police used a similar strategy last year without any official announcement. Some police officers believe this led to the reduced incidence of violence then.

Considered one of the biggest high-school track-and-field meets in the world, Boys and Girls' Champs has been scarred by stabbings and shootings, stone and bottle throwing among students and supporters of some of the top schools, mainly the all-boy institutions.

In their attempt to provide a safe atmosphere for Champs spectators, the police have mapped out a number of curbing strategies aimed at stemming the violence.

These measures were communicated to the principals of several Corporate Area high schools when they met with Hinds at the Police Officers' Club yesterday.

When he emerged from the meeting, the deputy commissioner told The Gleaner that making the National Stadium a "weapons-free zone" was the main aim during Champs.

To this end, he made it clear that the police would arrest anyone, including students, who was found in possession of weapons.

In addition, he announced that more police officers would be deployed at bus terminals and along the route leading to the stadium.

For their part, students from eight schools, including Kingston College and Calabar High, signed a declaration on Wednesday to promote peace at this year's Championships.

The signing was part of their Peace for Champs initiative, which was launched by head of the St Andrew Central Police Division, Assistant Superintendent Derrick Knight.

He urged parents to join the movement to reduce violence at Champs.

This year, the Inter-Secondary Schools Sports Association-sponsored event is in its 100th year and has drawn the attention of the international media.

To celebrate the occasion, The Gleaner has embarked on a Champs 100 tour, which has so far made stops at five high schools that have dominated these Championships.