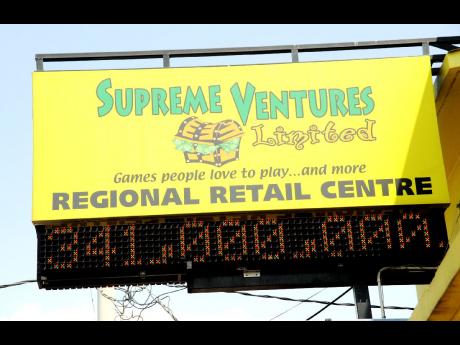 The Supreme Ventures Limited sign at the company's regional retail centre on Half-Way Tree Road displays the amount the big-money Super Lotto game had on offer up to Tuesday. There has been no winner so far. - Ricardo Makyn/Staff Photographer

A whopping $343-million jackpot is up for grabs tomorrow in Supreme Ventures' Super Lotto game, which has not had a winner nearly seven months after it started.

In addition, it's been 37 days since the $240m Lotto jackpot was hit, but still no one has come forward to claim the prize.

This has led to scepticism among some people interviewed by The Gleaner about the authenticity of the games.

"I don't think it is genuine ... . I think it is fixed because if it wasn't, somebody woulda win it already," was the view of Judith Williams, who lives in St Elizabeth.

She admits that she still buys the Super Lotto, but only to "see if mi can win one a di smaller prize".

Carlene Edwards, Supreme Ventures Limited's (SVL) corporate communications officer, is well aware of the doubt, but defended the integrity of all the games.

In fact, she went a step further and invited members of the public to come in and watch the draws themselves.

"All they have to do is call ahead of time so we can make the necessary arrangements," she said.

She reiterated that SVL had warned players from the outset that the odds of winning the Super Lotto, in particular, were greater than the other games.

The reason, Edwards pointed out, was the fact that the Super Lotto is also played in seven other Caribbean islands.

The Super Lotto began on August 25 last year with a jackpot of $180 million. The jackpot is raised, based on sales, every time there is no winner.

Kingston resident Chunky Burton said she no longer buys what she called the "thiefin' game", but gave a different reason.

"Who fi win it nah win it, and di people who nuh want di money, a dem a win it," she said.

Despite the suspicion, Edwards said SVL had not seen a fall-off in sales of Super Lotto and Lotto tickets. She did not provide any numbers, but said sales had remained relatively unchanged.

After 90 days, half the $240m will be paid into the Govern-ment's CHASE Fund and the other half used for community development initiatives.