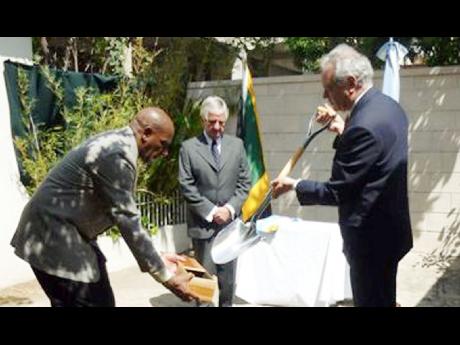 A symbolic ceremony to exhume and repatriate the mortal remains of Mayor Colonel Juan José Feliciano Fernández Campero, Marquis of Valley of Tojo (Yavi), was presided over recently by the Embassy of the Argentine Republic in New Kingston.

The Marquis of Yavi was a commander during the Wars of Independence in Argentina, Bolivia and Peru, a colonel in the armies of the United Provinces of the Rio de la Plata and a representative in the Tucumán Congress of Independence. Taken prisoner by the Spaniards in the Battle of Yavi on November 15, 1816, and on the way to Spain to face the death penalty, due to his noble hereditary title, he was abandoned by his captors in Kingston where he lived in forced exile until his death on October 28, 1820.

The remains of the Marquis of Yavi were buried in the cemetery of the Holy Trinity Church. The building was destroyed in the earthquake of 1907 which struck Kingston. The location currently houses the Jamaica Printing Services Limited.

"The Embassy of Argentina is observing this year, bicentenary celebrations of the May Revolution. The celebrations began with a ceremony paying homage to the Marquis of Yavi," a release stated. During the ceremony, Argentine Ambassador Mario Pino expressed his gratitude to Jamaica which guarded the Marquis' mortal remains.

Pino and Dr Rodolfo Mart'n Campero, a descendant of the Marquis of Yavi, representatives from the Ministry of Foreign Affairs and Foreign Trade and the Jamaica Defence Force, as well as the ambassadors of Chile, Colombia, Venezuela and the deputy head of Mission of Mexico, (countries which also celebrate the Bicentenary Year of Independence), and the Argentine community, Father Gerard McLaughlin, archdiocese archivist, were in attendance.