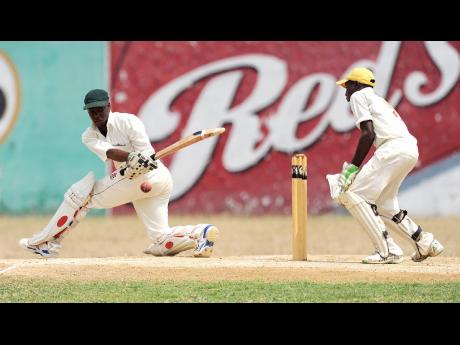 Resuming the day needing another four wickets to claim first innings and gain the ascendancy in the three-day encounter, Innswood did so after dismissing Eltham for 124 - 74 runs short of their modest first innings total of 198.

The Old Harbour Road-based institution then cemented their position in the match when they posted 322 in their second innings, for an overall lead of 396.

Eltham, in their second time at bat, were 4-1 when stumps were drawn due to bad light 13 minutes before the scheduled close of play, still another 393 runs shy of victory.

"We tried to start afresh in the morning in chase of the 83 runs required for first innings, but it didn't work out," said Eltham's captain and batting all-rounder Kino-Paul Sailsman.

"They then had us under pressure in the field in their second innings. But after getting their openers, I thought we came back well, and though we are up against it, I believe we can still pull it off," he added.

Eltham's first innings demise was a result of a fine spell of fast bowling from Michail Powell, who in the space of 15 minutes knocked over Eltham's last four wickets for the addition of just eight runs.

Powell, who bowls with a sling action, which proved a handful for most, if not all, of Eltham's batsmen, ended with figures of 4-20, while off-spinner Peat Salmon, who did most of the damage on Wednesday's first day, finished with 3-30.

Innswood then went on to drive home their advantage with an opening stand of 136 between Oraine Williams, 82, and Salmon, 63, and a fifth-wicket partnership of 135 between Oshane Morgan, 81, and Marshall March, 53.

"We knew we had to get four wickets to claim first innings and the bowlers applied themselves well," said an elated-looking Kirk Gordon, coach of Innswood, which was established in 2000.

"The plan after that was to bat out the rest of the day, and though we did not achieve that task I am proud of the total we achieved. Our plan now is to come tomorrow and again apply ourselves," he concluded.