Mullings back at the track 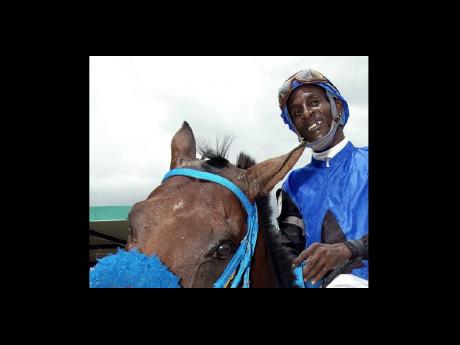 Jockey Oneil Mullings will resume riding at Caymanas Park tomorrow, having been sidelined by injury since the latter part of 2008.

He has secured two rides on the nine-race programme, namely, TRAINER'S CHOICE in the first race over 1300 metres and FIRELINK in the fifth over 1400 metres.

The 33-year-old jockey last rode at Caymanas Park on August 27, 2008, winning aboard the Robert Darby Sr-trained BADJEROS ROSE that day.

The following month he was involved in a serious motor vehicle accident along the Spur Tree Hill road in Manchester and was hospitalised for months.

Mullings went abroad a year ago to continue his rehabilitation in the United States, and having fully recovered, returned home on Monday. The next morning he was seen at Caymanas Park exercising horses with a view to making his long-awaited return to the saddle tomorrow.

Millings had been sidelined by injury before, having been involved in a riding spill which kept him out of action for months. Mullings, who can ride at 50.0kg, said he is looking forward to riding tomorrow.

"I did what I had to do to get back in shape, but it was a lot of hard work," he said. "However, my determination got me through and I give God thanks for everything," he was quick to add.

A 2002 graduate of the Jockeys' School in a batch which included Paul 'Country' Francis and Dane Nelson, Mullings has a career haul of 219 winners.