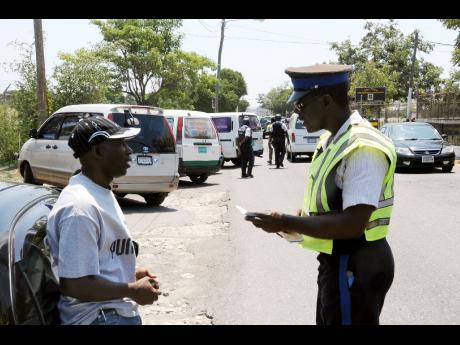 CONSTABLE AINSROY Rushton prosecuted a driver on Mannings Hill main road, only to be mowed down by the motorist who attempted a getaway.

The constable, who worked at the Constant Spring Police Station, died on Thursday night at the University Hospital, where he was being treated.

"(Rushton) was a professional policeman from a Christian background," said Superintendent Anthony Castelle, in charge of Constant Spring Police Station.

"His family spoke highly of him."

According to the Constabulary Communication Network (CCN), policemen stopped a motorist, 23-year-old Dwayne McKenzie of Forrest Hill, St Andrew, on Thursday. They saw that the driver's documents were not in order and told McKenzie they had to seize his vehicle.

The CCN reported that the driver drove off, dragging Rushton for several metres, before crashing into a wall and getting away on foot. McKenzie was later taken into custody by the police when he returned to the accident scene.

The office of the director of communications and public affairs of the Ministry of National Security released a statement saying Minister Dwight Nelson was saddened by Rushton's death, and the driver's refusal to comply with police personnel reflected the indiscipline in Jamaican society.

The release also said Nelson was urging police officers to maintain their professional conduct despite the tragedy.

Superintendent Castelle said he had seen Rushton two days before he was killed.

He asked the constable why he looked so sad and Rushton replied: "No, Supe, I'm all right." Nevertheless, Castelle told him to "cheer up".

The superintendent described Rushton, a member of the Seventh-day Adventist Church, as a "hard-working and honest policeman".

"The station is in mourning and is grieving with his family."