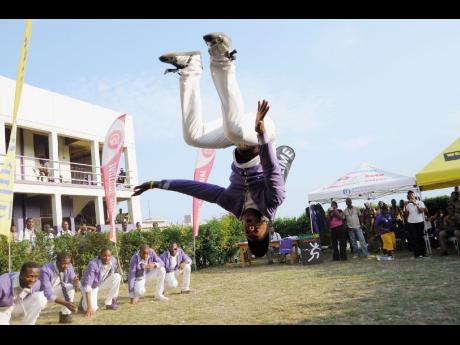 A member of dancing sextuplets, Shady Squad, somersaults during his performance at the culmination of The Gleaner's Champs 100 School Tour at Kingston College yesterday. - Ricardo Makyn/Staff Photographer

It was the series' final stop before next week's spectacle at the National Stadium. Earlier visits were made to Calabar High, Holmwood Technical, St Jago High, St Elizabeth Technical and Herbert Morrison Technical over the last six weeks.

After weeks of anticipation, it was the 'purple army's' time to be caught up in what is being called 'responsible revelling'.

Some of the country's leading dancehall/reggae luminaries took the stage to deafening responses as the students joined in celebration of the 100th staging of the internationally respected four-day meet which gets started on March 24.

Crooner, Chevaughn, who rose to fame with his Holiday summer anthem, done in tandem with dancer-cum-deejay Ding-Dong, was part of the highly impressive entertainment package that also included the likes of DASECA heavyweights Bugle and Raine Seville, female standouts Natalee Storm and Tifa, and the increasingly popular dancing sextuplet Shady Squad.

Former KC sprinter André Wellington, who had to pull out of the event at the last minute due to his commitments at the Inter-Collegiate Championships, was represented by present team captain Jonathan Reid, who read a speech, prepared by the University of Technology/MVP athlete.

"Gentlemen, when you are down and it seems like there is nowhere else to go, dig deep within yourself and hold on to the greatest school motto ever, the Kingston College school motto - 'Fortis cadere cedere non potest'. 'The brave may fall but never yield'," Reid read.

"Paint yourself in the big picture of your success and believe in yourself. You were put on this Earth to make a difference, accept nothing less. The sooner you start, the sooner you will succeed. Right now you are one choice away from a new beginning - one that leads you towards becoming the fullest human being you can be," the missive continued.

Tour sponsors GraceKennedy, Western Union, Victoria Mutual Building Society (VMBS) and LIME were once again well represented on the ground, as students flocked their various booths and were attentive during their on-stage presentations.

The 'Champs 100' tour was staged in partnership with GraceKennedy, Western Union, VMBS and LIME in celebration of 100 years of local high school athletics competition.