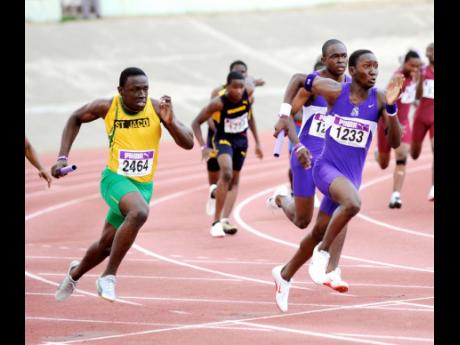 With three days remaining before the 100th staging of ISSA/GraceKennedy Boys and Girls' Championships, the defending champions and most successful team in the meet's history, Kingston College (KC), have been busy planning to earn their 32nd lien on the crown.

The North Street-based school is very keen on retaining the title, especially with this being the centenary staging. The coaching staff, led by Michael Russell, has, however, been careful not to transfer this pressure to the athletes.

"KC is the winningest school as far as championship is concerned, so it must be important for us, but this is not transferred to the athletes to put them under any pressure," said Russell. "We will always ask for our athletes to do their best when they are competing, and usually their best is good enough to get the championship," he added.

According to Russell, KC's preparations have been going well as they have no major injuries.

"We had a few (injuries) earlier on in the season but those are being taken care of so the guys are ready and raring to go."

KC narrowly edged out Calabar last year for the title, winning by one and a half points, and Russell sees it being just as close this time around.

"I see it being just as close as last year, what has happened is that every team has basically lost a certain number of athletes, who would have garnered some amount of points, and based on the points spread we see it as just about even," said Russell.

Russell is expecting their greatest challenge to come from Calabar.

KC anticipates strong performances in all classes and is, therefore, promising a good all round showing. Russell, however, believes that the field events points will be more evenly shared than in previous years.