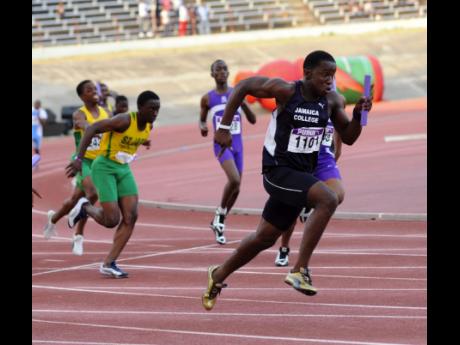 Jamaica College (JC) was the first school to notch up a hat-trick of wins at Boys' Champion-ships, and they would love nothing more than to win their 21st title on the centenary of the championship.

Orville Brown, head coach of JC, believes that this year's championships will be the biggest ever.

"Naturally, this is probably going to be the biggest champs in terms of organisation and execution, so we are hoping that we will add our element to the show," said Brown. "I am expecting Champs to be close; it might not be as close as one and a half points, but certainly, there is going to be a much smaller gap between the top teams this year."

Brown also pointed out that despite a few injuries preparations are going well.

"There have been a few injury concerns here and there but it is not a major problem, just maybe one or two athletes who need to be passed fit because we are going to need them. Other than that everything is going well."

JC are expecting the major challenge to their title quest to come from the defending champions KC, Calabar, Wolmer's and St Jago.

The Old Hope Road-based school has a strong Class Three squad and Brown expects his sprint quartet to break the 4x100m Champs record.

"We are strongest in Class Three," said Brown. "We broke the Gibson Relays 4x100m record and with some improvement we expect that we can challenge the Champs record. We are making adjustments with that in mind," he added.

JC are also looking for major improvement in all the jumps.

Brown said: "We normally do well in the throws, we won't be dominating naturally, because Calabar are a powerhouse team in the throws, but we figure we will be scoring well enough to stay in contention. We are looking forward to major improvement in the jumps, as in the past two or three seasons we haven't done very well."