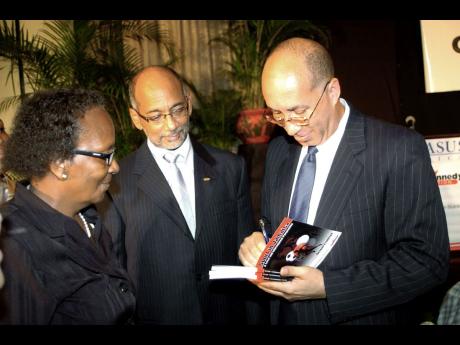 Sarah Newland-Martin (left) and Douglas Orane (centre), CEO, GraceKennedy Limited, look on as Delano Franklyn autographs a copy of the book 'Sport in Jamaica - A Local and International Perspective', during the lecture symposium of the same name that was hosted by GraceKennedy Foundation in partnership with the Inter-Secondary Schools Sports Association. The lecture took place at The Jamaica Pegasus hotel. - Winston Sill/Freelance Photographer

Jamaica currently suffers from an inadequacy of research material to properly inform sports policy formation. This is the case in literally every area of the industry, but more so in terms of economic development.

This troubling assertion was delivered by noted attorney-at-law Delano Franklyn as he gave a lecture on 'Sport in Jamaica: A local an international perspective' at the Jamaica Pegasus on Tuesday.

The lecture was the latest in the GraceKennedy Foundation series.

In his presentation that covered the major sports in this country, Franklyn urged administrators and lawmakers to build on the island's great legacy in sports, that in recent times has manifested itself in the form of record-breaking performances by the island's athletes at the Olympics, World Championships and other major global events.

"Jamaica is a great country, made even greater by its outstanding achievements in sports," Franklyn said. "Ordinary men and women have consistently performed extraordinarily on the international sports stage, defying our population size, geographic area and financial resource constraints. We need to build on this legacy now."

Speaking to an audience comprised of scores of students, members of the business community, journalists, sports administrators and members of the general public, Franklyn said Jamaica needs - sooner rather than later - a national development plan for sport.

"The plan should set targets and projections and be part of a wider national plan to take the country out of the economic and social quagmire it finds itself in," he said.

Sport requires concentrated focus and attention, he said, in reference to the mindset among lawmakers.

"To be placed in a ministry where the minister also has responsibility for youth, culture, entertainment, community development, women and gender affairs undermines the essence of what can be achieved by sport," he said.

In a wide-ranging presentation Franklyn, who is also chairman of the Asafa Powell Foundation that is tasked with helping with the deve-lopment of aspiring track and field athletes, made a raft of recommendations covering all sports, that he feels would aid the development of sport in a manner that would benefit the country.

Track and field, which he describes as the "jewel in the crown" of Jamaica's sports, needs to undergo change.

"Part of the change required in moving the Jamaica Amateur Athletic Association (JAAA) towards greater professionalism is the strengthening of its administration. The JAAA needs a full-time executive officer carrying out the mandate of the board on a day-to-day basis. That executive officer needs to be supported by a well-staffed secretariat."

Among his other recommendations was the creation of a "properly thought-out mechanism where from early we are able to discover and harvest talented athletes".

Talented youngsters, he said, must be spotted and placed on a particular path of development from very early, including their academic and personal welfare.

He also suggested that, from a symbolic point of view, the JAAA remove the word 'amateur' from its name. The acronym, he suggests, could stand for the Jamaica Association for the Advancement of Athletics.

He put forth another recommendation that drew applause.

Franklyn offered suggestions that, he believes, would raise the standard of football and netball, as well as transform the misfortunes of West Indies cricket.