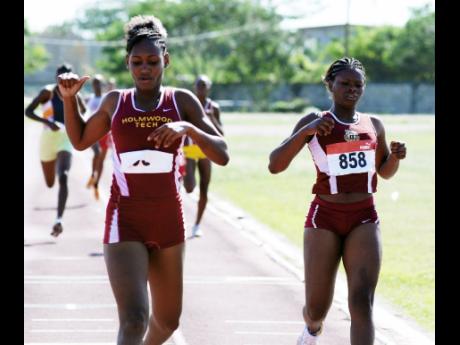 Manager of defending champions Holmwood Technical, Chester McCarthy, has warned his rivals that last week's Milo Central Championships defeat to Edwin Allen is not a true measure of the strength of his team.

In making it clear that they will be right there at the end, McCarthy said it would be a different ball game, come Boys and Girls' Championships.

"It's going to be a more determined team, and I can tell you we have won at championships before, Edwin Allen are new coming to this part of the scenario ... and it's going to take a lot more than they think to pull this championships off," he added.

"It's only our Class Four group that does not know what it takes to win a championship. Edwin Allen have no clue," said McCarthy.

Speaking of Class Four, McCarthy believes if these girls deliver by giving 18 points Holmwood will win Champs even before the relays next Saturday.

According to the experts, Edwin Allen should outscore Holmwood in Class Four, but McCarthy believes this is only so because his girls are yet to spark.

"If we get as little as 18 points from our Class Four, he will not be able to touch us, we don't have to beat him in Class Four, we just need to get some points."

In Classes Two and Three, the experts expect Holmwood to outscore Edwin Allen, but Dyke, while admitting they might score less, said they would not fall too far behind.

Edwin Allen are top-heavy in Class One and could prove untouchable but, according to McCarthy, untouchable is not the right word.

"They have a stronger Class One overall than we do, but I can definitely tell you, our Class One people will be stepping up next week," he explained.

Petra Fanty, who defeated a strong Class Two field last year to win the 400m event, Yanique Ellington, Samantha Woodburn and Sashawna Bennett are the ones McCarthy have all the confidence in to deliver.

"We are not worried in any big way about certain things right now. As I say, once we get this Class Four to pick up their game, you are going to have a very enjoyable championships and, at the end of it, Holmwood are going to be victorious."