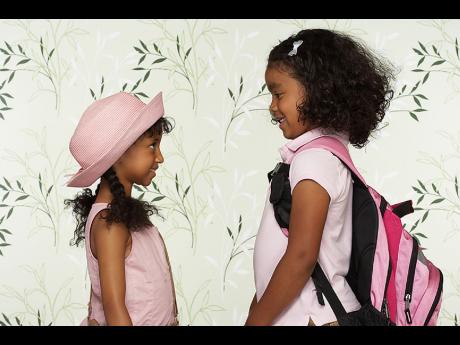 Megan Riley was my friend. Well, maybe not in the truest sense of the word. To Megan, I may have been more like a faithful but pesky little thing who did not know when to quit. So, though I was definitely her friend, I wasn't at all sure she was mine.

Megan was the brightest girl in her class; maybe in the whole school. She was dark-skinned, serious and neat. Her sharp pleats were always in place as were the tiny worm-like lines into which Mrs Riley braided her hair. I cannot remember ever seeing my friend at play.

I admired this heroine of mine from a distance, for she didn't seem to need me or anybody else. Though I would have refused to admit it at the time, Megan was a bit stuck-up and it was this attitude of hers which finally brought matters to a head.

Everybody, including herself, thought Nancy Evans was white. Her mother was black and her father was not fully white, though he had some white blood. Nancy had long, wavy hair and very fair skin, and she figured that these attributes entitled her to great respect and a following. But Nancy was not bright, nor was she neat. Megan was not at all impressed. Naturally, our white girl was most offended by this attitude so she set out to change it.

At first, she tried rage. Every day after school, Megan walked alone, with me in tow, while Nancy followed with an entourage of at least six girls. I felt obliged to support this girl who walked alone and fought alone against Nancy and her mob. So while Nancy and the mob yelled insults like "Natty Head!" and "Black Gal!" at her, I followed distractedly and not at all happily, behind Megan. (Most of those shouting insults also had short hair and dark skin!)

Megan seemed more surprised than afraid the first day this happened. She hugged her books closer to her chest and walked away with her nose in the air. The mob yelled louder. I worried that they might decide to get violent but, thankfully, they didn't.

After a few weeks of this, Nancy realised it wasn't working so she changed her strategy. Poor Nancy! She was about to learn first-hand, just how proud and feisty my friend was.

It was lunchtime on a Monday. Megan lived near to school so she always went home for lunch. As we ended grace, Nancy approached Megan. She was smiling. As my friend gazed calmly into her face, Nancy told her that there was no need for her to go home. She had brought lunch for her. Mr Evans was a butcher and he had slaughtered a goat on the last weekend. Nancy was clearly willing to settle for an equal and friendly relationship with my friend, if she could not claim respect or reverence.

But my friend was not interested. In her signature style, she turned her nose up at Nancy and told her that she had "fresh, healthy food at home". This "fresh" idea was in reference to the fact that Nancy's offering was a carry-over from the previous day's dinner. Needless to say, our white girl was mortified. She wept like a rainstorm and swore to get back at Megan in a major way.

Nancy's opportunity to repay my friend came much sooner than anybody expected. Megan's father was supposed to be a carpenter but he was primarily a drunkard so her mother had to sew, by hand, some of the clothes her children needed.

How Nancy got wind of this information, I do not know. Soon, the rumour was flying about the school like jingy flies in mango season. Bright, bright Megan Riley did not wear store-bought panties, the rumour was. Her mother could not buy her jersey or seer sucker panties which the rest of us wore.

My heart ached when I heard it. My friend was sure to be down for the count this time. Every day I milled around among the mob members, pretending to be as appalled as they were over Megan's poor choice of underwear. Before long, I got the information I needed. The day I discovered that that would be the day for the confrontation, I approached Megan to inform her of what Nancy and the mob were planning.

As usual, she showed no sign of being in any way as alarmed as I was. I even suggested she ask to be allowed to leave before school was dismissed. She shook her head, informing me that she was quite capable of protecting herself. I was sorely tempted to leave this girl to cope single handedly with whatever atrocity our white girl may see fit to meet out to her. I knew it wouldn't be pretty. But my absurd sense of loyalty simply would not permit me to do what was safe and sensible.

My heart jumped when the bell went. We stood and said our prayers. I could feel the tension in the air even before we said "Amen". Nervously, I followed my friend out. I was afraid to look behind me, until I was compelled to by the threatening noises which came from Nancy and the mob. I watched helplessly as they narrowed the distance between us. Megan stopped and waited for them to catch up. She ignored me as I tried to convince her that running would be a far better idea.

"So you believe you white?" Megan asked her calmly.

At that moment, Nancy's claims to whiteness came as close to being true as ever. Her face turned pink. Her long hair blew untidily about her cheeks, as with trembling lips she said to Megan:

"If I don't even white, I don't black like you and I don't wear cotton panty!"

Gleefully, the mob cheered on its leader. I was beginning to tell myself that I was very foolish to have hitched my wagon to this falling star but I still could not bring myself to move. Then Megan asked Nancy:

"How you know that I wearing cotton panty?"

The mob was suddenly silent. Nancy said nothing for a while. The mob wanted drama. They had come to witness the ultimate embarrassment of my friend and witness it they would. Loudly they yelled:

"Nancy, show her you pretty panty!"

Nancy recovered her spunk and dutifully obeyed. Quickly, she hiked up her skirt to expose quite a presentable pair of seer sucker panties. Then she glared at my friend.

"See my own here!" she challenged.

The mob screamed delight. But the words were hardly out of Nancy's mouth when Megan lifted up her skirt too. In exactly the same tone, timing and rhythm with which Nancy had spoken, my friend repeated the words:

I will never, till I die, forget how I felt when I saw what my friend displayed that day. Flour dumplings in run dung; Sunday rice and peas and chicken; new shoes and frock with socks to match! Having all my childish dreams fulfilled could not compare to the overwhelming joy that I experienced when I saw what Megan was wearing.

For it was not the home-made cotton panty that Nancy and the mob had hoped and expected to see, but a beautiful store-bought jersey panty; one of a higher pedigree than even Nancy's.

The enemy and her mob slithered quietly away as I grinned happily at my friend. She gave me one of her rare smiles as we started to walk home. Later, I discovered that Megan wore her home-made clothes only at home. The funny thing is that though I was happy and proud that she had been vindicated, I no longer felt the need to stick close to her. I was finally convinced that she could take care of herself. And that was when she began to take an interest in me. Maybe she was grateful that I had stuck by her. Maybe the confrontation had caused her to begin to feel more like one of us. Maybe she felt it was time to get off her high horse. But now that the mob had dispersed, I was beginning to find Nancy a much more tolerable person. My friend quickly got the message and she continued to walk alone.