Looking into Seaga's contribution to Jamaica 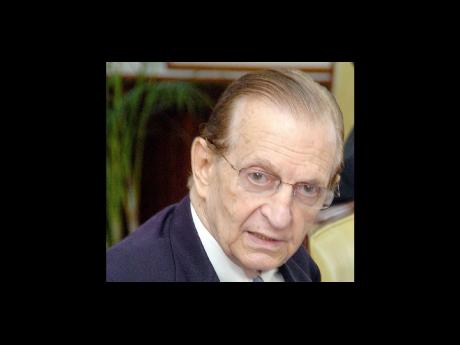 Title: Edward Seaga and the challenges of modern Jamaica

This scholarly work of some 370 pages is authored by Patrick Bryan, the Douglas Hall Professor of History at the University of the West Indies (UWI). It is published by the University Press.

Professor Bryan is eminently suited to write on the subject of this book, for his wide-ranging list of publications include Jamaica: The Aviation Story; The Jamaican People 1880-1902; and Inside Out and Outside In: Factors in the Creation of Contemporary Jamaica. They are all relevant to the topic and display a wide grasp of the politics and sociology of national development. For this is what the book is all about.

This book has some 20 chapters with extensive notes, references, bibliography and index. The author used primary sources, government records, interviews and secondary sources to paint a compelling portrait of a complex man, a contradictory mixture of idealism and pragmatism but, above all, a Jamaican nationalist who had a profound impact on Jamaican politics, tourism, culture and finance.

The text is very clear and, apart from the details on Seaga's involvement in modern Jamaica, gives important insights into the social, political and economic developments of the country. The book has a number of photographs, either from Seaga's collection or from The Gleaner archives, and the only disappointment in this area is the quality (in black and white only) of the photographs.

The author's introduction is particularly helpful, as it gives some important insights of the country and its development, and how Seaga fits into that context. In identifying the historical forces that shaped Jamaica's modern history, Bryan records how Seaga confronted these forces and the approach is balanced and neither adulatory nor apologetic.

It can well be said that many of Jamaica's institutions and features on the landscape were part of the vision and initiative of Seaga while he was a part of the government as parliamentarian, minister of government and, later, prime minister. Brian Meeks, professor of social and political change at UWI, in commenting on this facet of Seaga's contribution remarks:

"There is, perhaps, no other politician surrounded by as many myths, half-truths and falsehoods in Jamaican politics as Edward Seaga. Bryan carefully unearths the records to remind us, collectively, of Seaga's enormous contributions in shaping contemporary Jamaica."

The book largely follows a chronological historical record of developmental issues in modern Jamaica. It is by no means a biographical study of Seaga, there is little or no reference to his family life. Rather, the book identifies his intervention, innovative involvement and impact on various aspects of Jamaica's development. They are clearly identified and carefully documented and run like a golden thread throughout the book. It was inevitable that someone, who had such an intimate understanding of the psyche of the Jamaican people, who had worked with the charismatic Bustamante, who had a visionary insight into what was possible and who served an inner-city community as political representative, would have made many enemies. Some were members of his own party whereas others were, of course, from the opposition.

A quick look at a few of the chapters gives the reader some impressions of the book.

Chapter one, 'Precedents', gives perspective to Seaga's family, educational and early background and provides important insights into the directions that his life would take. His Lebanese ancestry would forever be a political weapon used against him. There were claims that he was not Jamaican, even though he had renounced his United States citizenship. In some ways, this was P.J. Patterson's election trump card during the long period of Seaga's role as leader of the opposition

Chapter 10, 'Community Development, The Case of Tivoli Gardens', gives the background of how a site of squalor and decay was made into a vibrant and unique Jamaican community.

Chapter 12, 'Edward Seaga and the Michael Manley Regime, 1972-80', is unexpectedly, not one of the longest chapters in the book. The Manley-Seaga political battles are legendary in Jamaican life, and the issues raised in the chapter were a prelude to the bitter and violent elections of 1980, which saw the Jamaica Labour Party being victorious at the polls and Seaga being sworn in as prime minister.

The 20 chapters of the book cover a wide gamut of topics that Seaga impacted. In these chapters there are topics such as: 'Entry into Politics'; 'Financial institutions and economic policy'; 'Structural adjustment'; 'the Bauxite Levy'; 'Educational Developments' (such as the HEART Trust); 'Jamaica, the Caribbean and Federation'; 'the Grenada Invasion'; 'Nationalism and National Heroes: Jamaican Culture and Festival'; 'Minister of Develop-ment'; 'Rodney and Black Power'; 'Marcus Garvey and nationalism'; 'The Urban Development Corporation and its impact'; 'East-West politics'; and more.