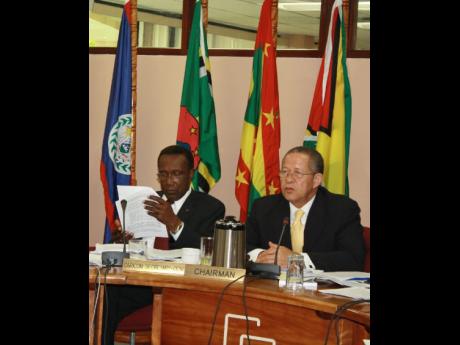 Jamaica Prime Minister Bruce Golding (right) is seen here with CARICOM Secretary General Dr Edwin Carrington. Jamaica will host a meeting of Cariforum and the European Union in March to settle on an agenda for a conference of heads from the two trading blocs to take place in Spain in May. - File

This month, senior Caribbean officials will meet in Jamaica with their European counterparts to consider the nature of the future Cariforum-European Union relationship.

Their objective is to develop a first outline of a joint Caribbean-European Union political strategy which may be used to inform the EU-Cariforum and EU-Latin American and Caribbean Heads of Government meeting due to take place in Madrid, Spain, May 17-18.

The meeting in Jamaica follows from a broader event organised in Barbados earlier this month, involving officials, representatives of civil society and the private sector. At that meeting, the objective was to develop an agenda of shared interests and priorities.

According to those who attended from both the Caribbean and Europe, the Barbados encounter suffered from an absence of debate about the fundamental political and institutional issues that need first to be addressed if the future relationship between Europe and Cariforum is to be based on reality.

That is to say it avoided addressing key questions that require resolution before a strategic partnership is possible.

It failed to explain why, at this time, a joint EU Cariforum strategy is required when both parties are struggling to make work existing institutional arrangements such as the Cotonou Convention and the Economic partnership Agreement. It did not ask how a Caribbean that is far from integrated, without regional institutions with executive authority and with differing foreign and economic policies, is to relate to a single European approach. And, it did not address how a more political approach would ensure that development and other aspects of the transatlantic relationship would improve, in practical terms, the everyday life of Caribbean and European citizens.

Most tellingly of all, two of those to whom I spoke and who represent industries central to the region's economic future, left the Barbados meeting after a short while as they judged it 'a waste of time', 'a sparring match' and 'unrelated to economic reality'.

Central to any debate is how any new strategy will be institutionalised and sustained in Europe and the Caribbean.

That is to say, how might a newer, more modern dialogue between all of the nations of the Caribbean and Europe involve the political leadership of both regions and have a breadth and legitimacy that addresses sensitive topics?

For decades now it has been the development and trade experts who have dominated the Caribbean-Europe dialogue.

While these issues remain important, a moment will come for both the region and Europe when a higher-level political dialogue on differing perspectives will be required, particularly as the region diversifies its international relationships to embrace China, Brazil, India or others the EU may have differences with.

Unfortunately, most of Europe's member states do not see exchanges with a fragmented region as viable, yet have not defined what counterpart they are seeking to relate to. As a consequence, it is hard to avoid the conclusion that any EU-Caribbean strategy will not be politically driven until the whole Caribbean region has a representative forum and has an institutionalised way to consult with civil partners.

It is probably no coincidence that the development of a new EU-Caribbean strategy is happening as other developments are likely to impact on the region's relationship with Europe.

The Anglophone Caribbean's traditional partner, the United Kingdom, is reviewing its defence and foreign policy objectives in the light of a severely reduced budget, suggesting that over time its regional relationship may become of less significance as may its weight on Caribbean issues in European forums.

For its part, Europe has changed significantly its decision-making structure.

The adoption of the Lisbon Treaty gives more power to the European Parliament. This suggests that as the Parliament becomes more influential, the Caribbean may decline in Europe's hierarchy of priorities, causing the Caribbean to have to find new ways to relate politically to Europe.

At the same time, Europe is developing a European diplomatic corps known as the European External Action Service. This will involve some 5,000 diplomats, 136 embassies, and a large headquarters staff in Brussels becoming involved in policy planning, crisis management, consular affairs and a range of other issues.

Up to now, European representation has been run through EU delegations but it appears likely that their role will be expanded so as to enhance their political, consular and economic activities, replacing in some locations the embassies of individual member states.

The problem with developing by consensus a Europe Caribbean strategy is that there is no extended debate on the relationship in Europe or in the Caribbean. As a consequence, responsibility is ceded to those on both sides of the Atlantic who have a vested interest in either protecting existing interests or adopting a simplistic one-size-fits-all approach.

Academics, the media and the business community are largely silent because they have become cynical.

Talk of partnership and strategy make the nature of the Europe Caribbean relationship sound important and intimate but are words that, over the years, have become hollow. They have done so as deeds have failed to match the words and grand concepts have been used to paper over not just cracks but whole chasms when it comes to issues such as trade, development assistance or the Caribbean Single Market and Economy.

Where all of this will lead - whether anything truly new, practical or not already pre-determined - remains to be seen.

Irrespective, this process is important as there is the real possibility that its outcome will mark a further step for the region - and the Anglophone Caribbean in particular - towards a relationship with Europe that will cease to be special; that will in practical terms separate it from the ACP grouping which it has been allied to since Independence; and which may lead towards a homogenised European approach to the Latin American and Caribbean region as a whole.