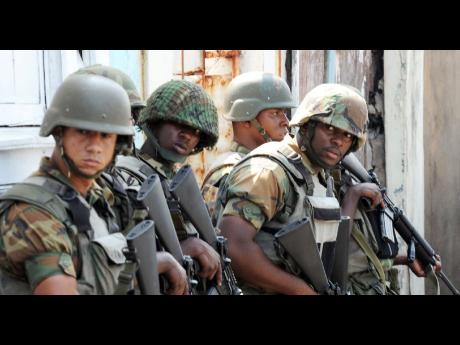 Henry Stewart and I were in high school together. He was a year ahead. Stewie was Olympic material. Although short and thick, he was a speedball on the track in the sprints, making his house a terror to the others.

Opportunity and nurture matter quite a lot in sport, as Delano Franklyn made abundantly clear in this year's GraceKennedy Foundation Lecture, the 23rd, 'Sport in Jamaica: A Local and International Perspective', last Tuesday evening [March 16].

Henry Stewart went into the Jamaica Defence Force straight out of school. The last time I saw him was in the Pechon Street bus park downtown as I headed out of the city. That was well over 30 years ago. Shortly after that Private Stewart took a gunman's bullet straight through the chest while on patrol in the garrisoned inner city.

Stewie was my first personal encounter with the murder of security personnel. While not killed on duty, today Corporal Miguel 'Tee Tee' Cuffe, of the Jamaica Constabulary Force will be laid to rest after being tortured and killed worse than an animal by unknown assailants. Between Stewie and Tee Tee, who were personally known to me, hundreds of security men and women have been killed in the last 30-plus years, many of them while fighting an unwinnable war against heavily armed thugs. Among them Inspector Lascelles Walsh, the voice of the JCF in Radio Jamaica's long-running traffic reports and a household name across Jamaica. Walsh was simply killed as a vulnerable and available target, riding his traffic patrol motorcycle downtown, in retaliatory strikes against the police.

Among them, Constable Reid, whose brother was a close friend of my brother and who was killed in action while courageously tackling a business place break-in on Half-Way Tree-way back at the end of the 1970s. Reid's funeral was my first funeral for a murdered policeman, and that dreadful day up in the hills of north Manchester, from which he came to serve, is still searingly fresh in my mind. Three officers are now nursing gunshot wounds wounds from another major urban-warfare battle last week, which began when the police accosted 'sleeping' alleged gunmen.

Jamaicans for Justice has belatedly discovered that security officers, policing under some of the most desperate circumstances on the globe, though agents of the state, have human rights and are getting killed. Their current advertisement counts the 10 security forces officers killed last year, along with the over 200 citizens killed by the security forces. Some of the highest numbers, per capita, in the world.

Security forces officers have described the clammy fear in engaging an unknown, and sometimes unseen, enemy in what amounts to be urban guerilla warfare with both sides having very different rules of engagement. Some years ago one former officer, now safely out and away from both the forces and the country, described in a letter to The Gleaner the horror of crawling along gully banks in full battle gear in the dark of night, never knowing where death may come blasting from at any moment.

The paper ran a front-page story last Tuesday, 'Inside the firefight', in which one of the injured police officers related to a colleague the encounter with gunmen under the tight conditions of urban-guerilla warfare. One of the gunmen was wearing a bullet-proof vest, the officer said, and not for media PR. He was completely unaware of the media pickup.

Any modern military commander who gives his troops clearly impossible missions or withholds necessary support for achieving a possible mission can be held criminally liable. Security officers on operations now have bullet-proof vests. Henry Stewart did not have one - and paid the price. Upping the ante to match bad man, police officers now have military-issue M16 rifles. What the militarised constabulary and the army do not have is the mandate and the resources to go beyond sporadic clashes with gunmen embedded in communities to complete the task of neutralising resistance while maintaining appropriate observance of human rights.

The Government and commanding officers are sending young men to their deaths in an unwinnable war, as presently conducted. Every life lost is wasted because nothing lasting is, or can be, achieved from the engagement.

To compound the issue, the situation of heavily armed garrison communities, in which the security forces face their greatest challenges to policing and biggest risks of death, and in which 80 per cent of the country's murders take place, have emerged aided and abetted by politicians according to all the reports and studies on the matter. Politicians form the Government of Jamaica, constitutionally bound to protect the human rights of all citizens, and to maintain law and order through the security forces. But the most heavily armed and most determined enemies of law and order that the security forces must contend with - and cannot defeat, as things now stand - are aligned to politics.

The 2009 Human Rights Report: Jamaica put out by the very self-righteous United States government, was released on March 11 as a sort of preamble to the battle of Hannah Town/Denham Town. Controversial police killings under 'Arbitrary or Unlawful Deprivation of Life', naturally, led the report.

Following local leads, the report chose to take out of context the infamous "collateral damage" statement of minister of national security, Senator Dwight Nelson. The report says, "The minister of national security referred to citizens killed by police as 'collateral damage' and vowed 'to use every effort' to defend police officers, who were 'hauled before the courts like common criminals'."

Hyper-conscious of both the rampant abuse of authority by the security forces and the desperate and dangerous conditions under which they must undertake the impossible task of maintaining law and order, I have made earlier comments on the matter earning the ire of elements of the leadership of JFJ.

We are grateful for the miracle that no non-combatants in the Battle of Hannah Town/Denham Town, including people in and around the Kingston Public Hospital, were injured or killed despite three hours of sustained gunfire in confined urban space.

And while we are on the matter, The KPH, the leading hospital of the English-speaking Caribbean, has been, for a long time, the victim of inner-city crime and violence. Staff had to be quarantined on the compound during the Battle of Hannah Town/Denham Town.

Before zeroing in on police killings as abuse of human rights, as many of them indeed are, The human rights Report truthfully notes that " ... well-armed gangs trafficking in weapons and narcotics and running lottery scams controlled many inner city communities and were often better equipped than the police force."

After going through a comprehensive range of human rights areas, on many of which Jamaica got passing grades, the Report arrived at 'Social Abuses, Discrimination and Acts of Violence Based on Sexual Orientation and Gender Identity.' It notes that "the law prohibits acts of gross indecency (generally interpreted as any kind of physical intimacy) between men, in public or in private, which are punishable by 10 years in prison.

In October, Prime Minister Golding, who, upon taking office, announced that no gays or lesbians would be allowed to serve in his Cabinet, called for a constitutional prohibition against same-sex marriage.

"The Jamaica Forum for Lesbians, All-Sexuals and Gays (J-FLAG) continued to report human rights abuses .... Police often did not investigate such incidents. [The police are not even investigating most cases of murder in the country]. J-Flag reported 33 cases of serious injuries to gays and lesbians over an 18-month period. The violence led many such persons to emigrate."

After citing many cases of anti-homosexual violence, this section of the human rights report concludes by saying, "human rights NGOs and government entities agreed that brutality against such persons, primarily by private citizens, was widespread in the community."

Prime Minister Golding, from the secure base of a garrison constituency, has been busy standing up for the human rights of a single prominent citizen. The extradition pressure now being exerted by the United States is only a dry run for the coming pressure for homosexual 'rights' in 'backward' jurisdictions like Jamaica. A man who wants no gays in his Cabinet should want no garrison captives in the country he leads, no more dead and wounded security forces officers from encounters with garrison forces in a contest now unwinnable, and no more officers abusing, and killing citizens in an unwarranted fashion, while fighting crime and violence, much of it fed by garrison politics.