Too corrupt for us 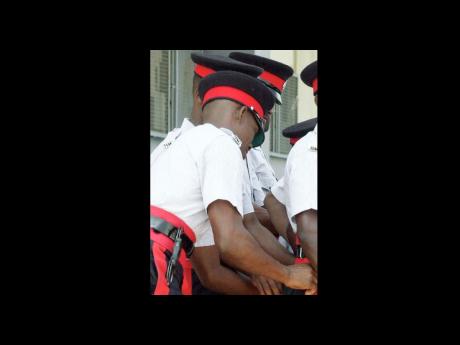 Young people across Jamaica agree that major changes would have to be made in terms of the integrity of law- enforcement officers before the police force became an attractive career. - File

THE BELIEF that many policemen and women are corrupt has joined low salary and bad working conditions as the main reasons educated young Jamaicans are shying away from a career in the Jamaica Constabulary Force (JCF).

The JCF has repeatedly bemoaned its inability to attract the brightest and best high school and university graduates, and indications are this will not change until the perception of the force changes.

Across central Jamaica, the almost uniform response from young adults is that the police force is not a preferred career choice because of the level of corruption.

"No, I wouldn't join the police force because I see a situation where corruption and other factors are rampant, and this deters persons from enlisting," 17-year-old Norman Tai, a student at Brown's Town Community College, told The Sunday Gleaner.

"Even students who were interested are now forced to choose alternative careers," Tai claimed.

He was supported by 16-year-old Okeine Dyer, second deputy head boy at Ocho Rios High School who says he wants to become a teacher and ultimately a principal.

"Because of the level of corruption in the JCF, I wouldn't join it," Dyer asserted.

However, both students said they would encourage others to join the JCF in light of the need to address the crime situation in Jamaica.

"But I wouldn't recommend persons who I know would bring more corruption to the police force," Dyer said

For Casandra Duncan, who graduated from Brown's Town Com-munity College last year, a career in the JCF doesn't appeal to her.

"No, I wouldn't join the force, I don't like the job," Duncan told The Sunday Gleaner.

"To me, the police are not doing their duties right. They are corrupt, and they fight crime based on a personal basis."

Duncan scoffed at claims that she could enlist in the force and try to make a difference.

"But then my life would be at risk based on the fact that people really see the force as being so corrupt."

Eighteen-year-old Adrian Masters, who left Munroe College two years ago, has long desired to be a cop, but lately, that has changed.

"I have always wanted to help people so I wanted to become a police, but what I see happening around Jamaica, it has changed my mind," Masters said.

"I see people hating the police, your old friends just hate you, your parents don't want you to become a police, they are afraid gunmen will shoot you, things might happen to you."

Ashmonique Fullerton, a senior prefect at Ocho Rios High School, said she would have to think twice before deciding to become a policewoman.

"Because being a student and seeing the things happening in the police force is not really welcoming."

And at 15 years old, Sabrina Campbell, who attends Iona High School in St Mary, is already labelling members of the JCF as "hypocritical".

According to Sabrina, "while the cops are arresting persons for breaching the law, they are committing the same acts for which they charge persons."

The young people all agree that major changes would have to be made before the police force became an attractive career.

"Take out the bad cops," asserted Duncan. "Don't just take them off front-line duty when something happens, it only means they will do it again as long as they remain in the force."

Tai concurred. "Zero-tolerance enforcement of no corruption," he said.