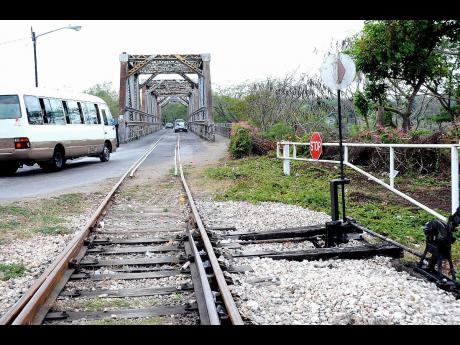 The railway line crosses the May Pen bridge in Clarendon. 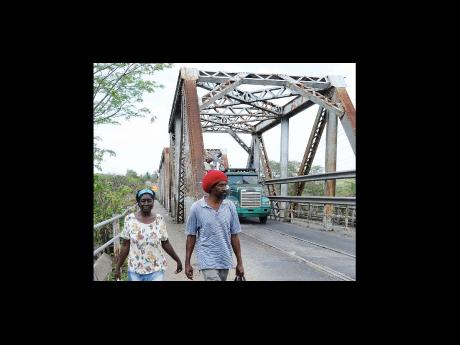 Ruthlyn Benjamin (left) and Rupert Gordon making one of their regular treks across the bridge. - Photos by Ian Allen/Photographer
1
2

The missing train station in St Margaret's Bay, Portland, was striking, but the desolation where the one in May Pen, Clarendon, once stood is especially jarring.

In St Margaret's Bay, sturdy, fruit-laden banana trees standing tall between the concrete sides of what was once the train platform give a smidgen of current human activity at what had obviously been a smaller station.

The expanse of concrete in May Pen is the base of a much larger station, and there is absolutely nothing around the foundation to show that it is being utilised in any way, or that something significant was once there.

There are two other unusual things about where the trains once stopped in May Pen. One is more of a curiosity; the line curves as it passes the station on one side, while all the other stations The Sunday Gleaner has seen the train line is straight.

The other is a clear and present reminder of the rail service, as less than 100 metres away the line runs across a bridge that now carries vehicular and pedestrian traffic.

The bridge, high over the Rio Minho, is so narrow that intricate manoeuvring is required if two large vehicles are to negotiate it at the same time.

The sides have been asphalted for pedestrians. It is on the left side, facing the base of the old station, that The Sunday Gleaner meets Rupert Gordon and Ruthlyn Benjamin, who are making one of their regular crossings.

There was a time when they had no asphalt to walk on, stepping on wood with the drop to the Rio Minho below showing through the planks.

Even with the asphalted walkway, the bridge vibrates with the passage of motor cars. Heavier vehicles make crossing it a 'shaky' experience.

Gordon says: "From me realise what life all about, me a walk pon this line. Me a walk from Duke Street go down Cane Piece. In the nex' direction me go up to Cross. When me reach me destination me branch off." The 50-year-old uses the train line because "it is a short cut".

Benjamin says that she has been walking on the bridge "from board on it. Me always coward, so me wait till somebody come an' walk with them so if me drop is not me alone go down."

Far below the bridge the bed of the Rio Minho is dry now, but back then if they had fallen there would have been a splash in very deep water. "When me walk me see space," Benjamin recalled. "Them say when me walking me must look out, not down."

Gordon's eyes glow as he says, "All a show name Dark of the Sun with Jim Brown act on this bridge." Benjamin claims she had seen the film and Gordon told her that he knows the stars.

They both rode the train many times and Gordon remembers that in addition to passengers the trains moved many bananas. He says that he would also walk the bridge while trains were crossing.

"You jerk up, but you still have you balance and so on. Nuff time it catch me on the bridge and me no scared, because me know the bridge well built," he said.

Looking back at the days when they would walk on the boards across the bridge, Benjamin says, "We did young, so we never pay it much mind. When you young you don't know what danger is all about. Now you wouldn't take the chance."