Cops quit, Close to 900 policemen and women resign in less than five years 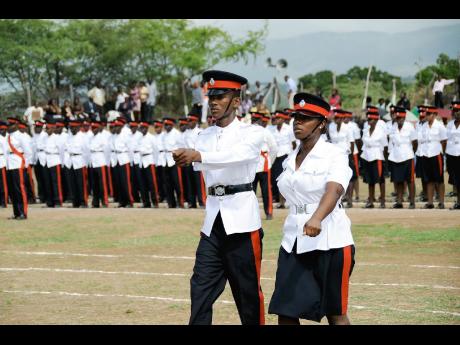 Constables Leon Hanson and Anita Fannel, who obtained the highest marks during the five months and two weeks training course at the Jamaica Police Academy's Tranquility Bay campus, St Elizabeth, march towards the podium to collect their awards during a passing-out parade last year. The attrition rate of JCF members is climbing even as the country battles a high crime rate. - Photo by Tashieka Mair

THE LEADERSHIP of the Jamaica Constabulary Force (JCF) is struggling to stem the tide of members quitting after going through months of training and years of invaluable experience on the streets.

A Sunday Gleaner analysis of the limited available data shows that the police high command is not winning the battle to keep experienced cops.

During his state of the nation presentation in the Senate earlier this year, National Security Minister Dwight Nelson admitted that recruiting and retaining police personnel was proving difficult.

Nelson told the Senate that even when recruiting efforts were successful, the police force faced a high rate of attrition.

"In fact, there was a period of time when the recruitment and training process added some 300 police officers to the force annually, but at the same time, the attrition rate was 250 ... . So you were training 300 and losing 250," Nelson said during his presentation.

The Sunday Gleaner's tabulation shows that between January 2003 and December 2004, 287 members of the force handed in their badges, while 547 'squaddies' left the force between April 2006 and March 2008.

An article published in late May 2005 reported that 29 members had already resigned from the JCF as at the 28th of that month, pushing The Sunday Gleaner tally to no fewer than 863 members walking away from the fight against crime between 2003 and March 2008.

At that time, now-retired Superin-tendent Almena Ewan, who was in charge of the personnel department in the office of the commissioner, was reluctant to comment on whether the figures were a cause for concern. However, she provided a few of the popular reasons tendered by cops for the decision to quit.

These included migration, employment opportunities elsewhere, and police personnel returning to civilian life and going on to further studies.

Asked whether police personnel were fleeing the force for safer ground, Ewan said: "If it is (so), most of them don't state it at the time."

The Sunday Gleaner was not successful in getting data on the rate of attrition over a specified number of years. Although a written request was submitted, up to press time, no information was provided.

Additional attempts to get the information from the JCF's website were also unsuccessful, as it has been down for about two weeks.

Police sources later said the website had been shut down because it had been hacked into.

But communications director for the JCF, Karl Angell, denied knowledge of any hacking. "Somebody may well have hacked into it, you might be correct, I don't know," Angell said.

"What I know is that the site is down and we are revamping it," added Angell.

But a source close to the information technology firm that hosts the website told The Sunday Gleaner that hackers had breached the security system and had written expletives on the home page.

In the meantime, the rate of attrition from the force is compounded by the fact that Jamaica has one of the lowest ratios of police to citizens in the Caribbean and the world.

This was noted by Nelson in his late January state of the nation presentation.

That is estimated at one cop to every 225 Jamaicans.

Number of Cops who quit

Full data for 2005 were not available.