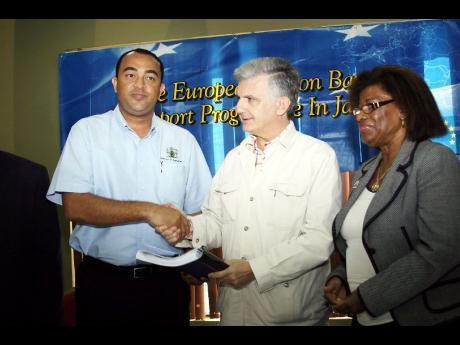 Agriculture Minister Dr Christopher Tufton (left) in discussion with head of the European Commission delegation in Jamaica, Ambassador Marco Mazzocchi Alemanni, and managing director of the JSIF, Scarlette Gillings. JCF and the EU have partnered to rehabilitate over 3 kilometres of farm road in Portland and St Mary. 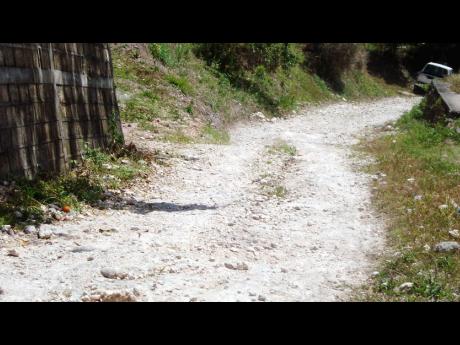 John's Hall farm road in Clarendon. Work is now in progress to pave the road, easing the transportation burden of residents. 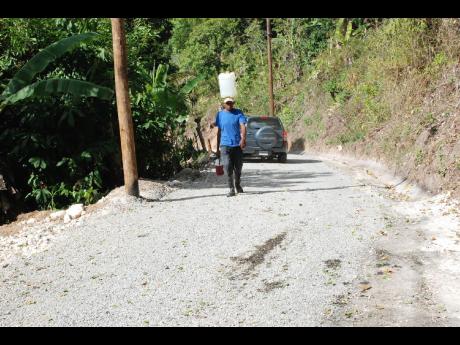 The newly constructed road in Maryland was funded jointly by Jamaica Social Investment Fund and the European Union. - Contributed
1
2
3

AN AGRICULTURAL revival is now under way in the communities selected for road and social services repair by the Jamaica Social Investment Fund (JSIF) under the European Union (EU)-funded Banana Support Programme (EUBSP).

Residents of John's Hall in Clarendon, and Maryland, St Catherine, are reporting sharp increases in production since the JSIF programmes started.

In Maryland, JSIF and the EU have spent $34 million to rehabilitate 3.5 kilometres of roadway, and residents say the impact has been phenomenal.

"Prior to the road repair the condition was, when I say deplorable it is putting it mildly, it was just stone and rocks to the extent where taxis refused to go into the area or people had to pay a special premium rate," Winston Hunter, president of the Maryland Community Association, told The Sunday Gleaner.

Hunter said that changed when the JSIF project was completed in the northeast St Catherine community in February.

"From it was said that JSIF was going to work on the road people who had left they area started to return, and now that the work has been completed people who own land in the area don't have hands to sell or lease them," Hunter added.

"We are talking about a community where 98 per cent of the people depend on farming for their livelihood, and what happen is that persons could not get to their farms or get their produce to the markets, so now that the road is fixed many farms that were idle are now back in production," said Hunter, as he noted that production had declined by 50 per cent in the area.

It is a similar story in John's Hall where the 64 registered farmers and others with their small plots faced a daily struggle to get to and from their farms.

Now, even before the repair of the 1.3 kilometres of the Gabriel Road was done, persons have been moving back to their farms.

"For the past 20 years, this roadway has been in disrepair and the farmers were in distress because this is an area where the people are in sugar cane, citrus, bananas, and we would reap and struggle to get them to the market," Irvin Francis, public relations officer of the John's Hall Citizens' Association, told The Sunday Gleaner.

"Now that the roadway has been improved to one step below the quality of Highway 2000, it encourages the farmers to go back into the production of crops," Francis added.

He said vegetables, food crops and citrus are blossoming in John's Hall and adjoining communities.

"There are actually some farmers who have started to recondition their farms because the prospect of getting out their crops is a real possibility now."

John's Hall and Maryland are two of the communities which contributed to the boost in the country's agricultural output last year.

Despite the extended drought, the sector recorded its sixth consecutive quarter of growth, from October to December 2009.

The areas of outstanding performance were condiments, which grew by 63 per cent; vegetables 40.6 per cent; cereals 32.4 per cent; yams 26.7 per cent and potatoes 23.5 per cent.

All parishes recorded an expansion in production for the quarter, with leading parishes being Portland, 160.9 per cent; St Mary, 92.1 per cent; and St Thomas, 69 per cent.

Overall, the agricultural sector grew by 13 per cent over the last quarter of 2009 while domestic crop production for the entire year increased by 22.4 per cent.

JSIF and the EU have played a major role in this revival through the EUBSP, which is funded to the tune of J$174 million.

Managing director of the JSIF, Scarlette Gillings, recently announced that the EU grant will be used to address many of the challenges facing traditional banana-growing communities while supporting and encouraging economic diversity.

The rehabilitation of 3.5 km (2.3 miles) of roadway in Maryland, St Catherine

The rehabilitation of 3.6 km (2.2 miles) of roadway in Moore Town, Portland

The rehabilitation of 1.3 km of roadway in John's Hall, Clarendon

The expansion of the Retreat Primary and Junior High School, St Mary