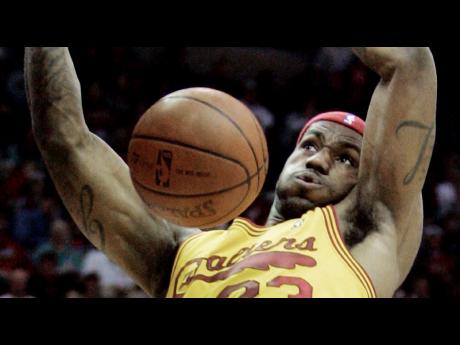 LeBron James became the youngest player to score 15,000 career points, breaking Kobe Bryant's mark by about two years, as the Cleveland Cavaliers pulled away late to beat Chicago 92-85 on Friday for their 12th win in 13 games.

James scored 13 of his 29 points in the fourth quarter, giving him 15,026 in his career, and had 11 rebounds. He scored seven straight late in the game as Cleveland increased its lead to 10, sending the Bulls to their 10th straight loss.

James reached the milestone at 25 years, 79 days, and he did it in his 540th game. Bryant was 27 years, 136 days and playing his 657th game, according to STATS LLC, when he did it for the Los Angeles Lakers.

At Phoenix, Amare Stoudemire scored the first 11 points for Phoenix en route to a season-high 44 as the Suns led all the way in a victory over Utah that pulled them within a game of the Jazz for fourth place in the West.

Stoudemire made 14 of 16 shots and 16 of 18 free throws. He scored 27 points in the second half, 16 in the final quarter, in Phoenix's first victory over the Jazz in three tries this season. Robin Lopez added 19 points and 10 rebounds, and Steve Nash 15 points and 10 assists. Carlos Boozer had 23 points and 16 rebounds for Utah.

In Los Angeles, Kobe Bryant had 22 points and a season-high 13 assists to lead Los Angeles to their sixth straight victory.

Timberwolves lost 12 in a row

Lamar Odom scored 11 of his 18 points in the fourth quarter, and Pau Gasol added 17 points and 14 rebounds for the Lakers. Jonny Flynn scored 20 points for Minnesota. The Timberwolves have lost 12 in a row and 18 of 19.

Johnson returning after missing two games because of Achilles' tendinitis, had 18 points, including 16 in the fourth quarter and overtime.

Josh Smith had 18 points and 11 rebounds for Atlanta. Raymond Felton led Charlotte with 25 points, and Gerald Wallace had 20 points and 16 rebounds in his return from an ankle injury.