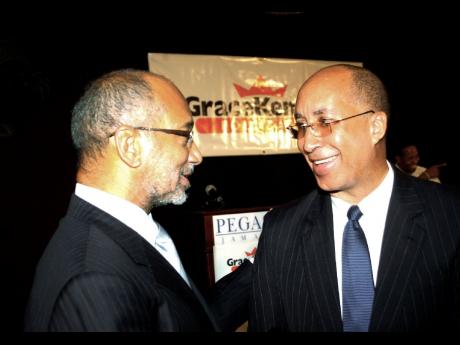 On Tuesday last, the GraceKennedy Foundation, in association with the Inter-Secondary Schools Sports Association, staged its annual lecture at The Pegasus hotel in New Kingston, and it was great, from start to finish.

It was a masterpiece.

The presenter was attorney-at-law Delano Fanklyn, a former senator and former member of parliament and minister of state in the Ministry of Foreign Affairs and Foreign Trade, the topic was 'Sports in Jamaica - a local and international perspective', and it was an outstanding presentation, in substance and in delivery.

For some 40 minutes Franklyn, a man of many achievements, kept the audience, a full house in the Grand Jamaica Suite, hanging on to every word as he spoke about Jamaica's achievements in sports over the years, the great Jamaicans in sports, the effect of sports on the Jamaican society, the benefits and the potential benefits of sports to Jamaica, and about sports as an industry in Jamaica.

As the applause rang out around the room, Franklyn also spoke about the importance, for many reasons, including financially, of a sports museum in Jamaica, sports and a healthy lifestyle, sports and crime, sports and education, sports and nation building, and last but not least, about sports and the economy.

Franklyn was not the first Jamaican to speak about any or all of those things, and more so since the exploits of Usain Bolt at the 2008 Olympic Games and at the 2009 World Championships.

He was the first, however, to put them all together, not only so professionally, but also so emotionally.

It was so touching, and Franklyn so convincing that the participation from the floor, represented by people from athletics, academia, and the business world, people like Dr Una Morris, Sarah Newland, Dr Christine Cummings, Dr John Hall, and Jimmy Moss-Solomon, was also impressive and encouraging.

The jewel of Jamaica

I will never forget, for example, when Franklyn said that once upon a time sugar and banana were the jewels of Jamaica and that, with proper handling, sports can become the jewel in Jamaica's crown; that Jamaica is number one in the world in the sprints, is in the top three in the world in netball, and is also in the top three in the world in violence; and that Jamaica is in urgent need of a national sports policy - that "sports is being administered by too many different state agencies without any semblance of central coordination".

I will never forget when, to a backdrop of applause, Franklyn said that sports requires concentrated focus and attention and "to be placed in a ministry where the minister also has responsibility for youth, culture, entertainment, community development, women and gender affairs undermines the essence of what can be achieved by sports".

I remember all those promises and, like Franklyn, I also notice that nothing has come of any one of them.

In the 1970s, former Prime Minister Michael Manley introduced the Sports Development Division to spread sports around the country. Recently, Prime Minister Bruce Golding said that he was going to give instructions that more of the Government's money in sports go to the communities, and I remember another of Franklyn's suggestion.

That suggestion was that the community must be key in any sports development process in this country, and that, again like Manley and Golding, more than 30 years apart, that more of the Government's money for sports should be spent in the communities.

Like Golding, while speaking recently at Kingston Cricket Club and referring to the state of West Indies cricket, Franklyn also said that top priority should be given to clubs.

Most important, however, I will also never forget Franklyn's emphasis when, towards the end of the lecture, he spoke about other aspects of the society.

"Jamaica's ability to competently build on its sports legacy will be greatly enhanced by the fixing of the education system, generating consistent and sustainable economic growth accompanied by social equity, the eradication of crime, and the restoration of law and order."

Apart from a few academics and a few businessmen, I did not see, or rather I did not recognise, any of those who walk the corridors of power.