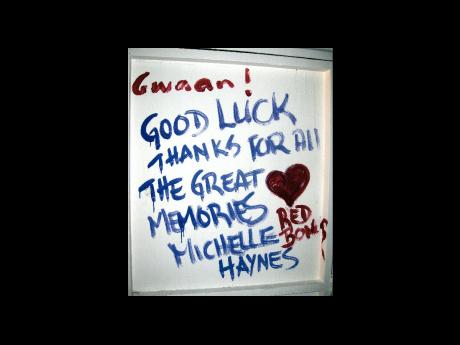 A welcome back message inscribed in paint at Redbones the Blues Café, 1 Argyle Road, New Kingston, on Thursday night. - Photos by Mel Cooke 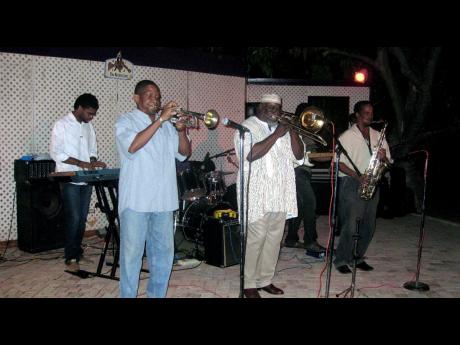 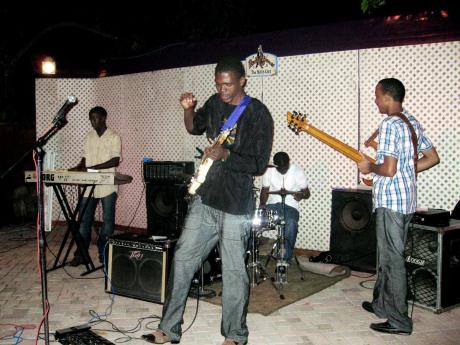 There was an air of familiarity as Redbones the Blues Café, the popular restaurant which also serves up performances and an art gallery, reopened officially on Thursday night after a four-month break.

The new set-up at 1 Argyle Road, New Kingston, is very close to the former one on Braemar Avenue (though much more roomy). And there were cheers as Enola Williams, who hosted the brief official ceremony, said all members of staff had come back on board.

Plus, she said to the large reopening gathering, "there are photos from our opening and some of you are in the photos." Part of the reopening ceremony was an opportunity for anyone who wished to inscribe their names, feelings and best wishes in paint in one corner, many doing so.

The opening was back in the 1990s and, in stating "the return of what we had," Williams emphasised "it is not easy to stay in the restaurant business for 14 years." "And getting the 1 Argyle Road venue ready was not a walk in the park either; when I first saw this place I cried. I was not sure what was going to happen," said Williams.

Among the things that have happened is a raised seating area on the left, after coming from the expansive parking lot and through the entrance, the bar area lower and at a right angle to that dining set-up. The semi-circular stage is near ground level across the courtyard, with a crescent of a slightly sunken dance floor before it.

"My father did an amazing job. He is a brilliant architect," Williams said about her father Evon. "This is more than a restaurant. It is an artistic and cultural space," she later added, noting that the art gallery would be in the main building.

Brian Pengelley of Diageo said that "it was a no-brainer" when they got the chance to partner with Redbones, Johnnie Walker and Baileys among the alcoholic beverages that will be offered there. "It was just an opportunity too good to be missed," he added, raising a toast "to the new Redbones and good times every night."

There were blessings, too; former non-denominational priest Martin Schade included a call and response of "bless RedBones" as he asked, in part, "may that divine protection shield this place."

The bands closed off reopening night, first Gawaine and Company with the blues, the guitar taking most of the lead, and then Nambo Robinson and the Idren Workshop, with the horns up front.