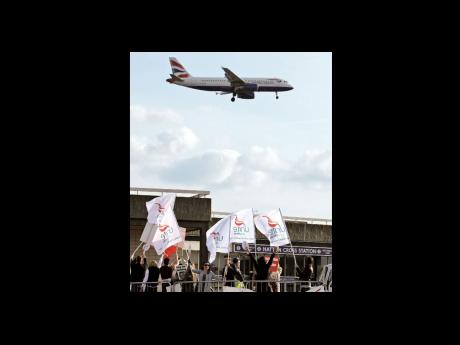 IT WAS business as usual this past weekend with the strike by British Airways (BA) cabin crew having little or no effect on flights from London Gatwick Airport to Jamaica and the rest of the Caribbean.

The crew, which went on strike last Saturday, making good on a promise to stay off the job on March 20, 21, 22, 27, 28, 29 and 30, disrupted some 40 per cent of the airline's long-haul flights from the Heathrow, London, terminal, but its Gatwick terminal was unaffected.

BA's cabin crew is disputing a pay freeze and changes to working condition. Their union is also disputing cost-cutting plans about which they were not notified by the airline.

"Neither Jamaica nor the rest of the Caribbean is currently at risk as a result of the strike by the cabin crew," Jamaica's Tourism Minister Edmund Bartlett told The Gleaner last week after a meeting with airline officials in London.

Bartlett said he was assured by BA officials that, particularly in Jamaica, the long-haul routes would not be affected, owing to contingencies in place to mitigate any major fallout in traffic.

Some 184,000 tourists to Jamaica came from the United Kingdom last year, representing 11 per cent of the market, said the tourism minister.

On the other hand, statistics from the Caribbean Tourism Organisation (CTO) show that the region receives 1.4 million tourists from the UK annually, repre-senting 25 per cent of all European arrivals, and six per cent of total arrivals.

"Many of our CTO member countries are, in fact, highly dependent on the UK market," said the CTO in a release last week.

Last Saturday, the BA contingency kicked in and the airline reported yesterday that it continued to operate a full Boeing 777 long-haul programme from the UK to more than 30 destina-tions around the world, and was adding several extra Boeing 747 flights because of crew turnout.

"Our charter operators are also continuing to work well and are integrating with our own short-haul flying schedules at Heathrow and Gatwick," said BA.

Yesterday, the airline said cabin crew was continuing to clock in as usual at Gatwick and Heathrow.

The airline said there had been no evidence of industrial action at any overseas airport directed at British Airways flights.

"We have added additional flights into our schedule at both Heathrow and Gatwick and customers can now book on to these flights."